This week’s matchup will be televised nationally on FOX, including WZTV FOX 17 in Nashville. Play-by-play announcer Kevin Burkhardt and analyst John Lynch will call the action, while Pam Oliver will report from the sidelines.

The Titans opened the preseason last week with a 31-24 loss on the road against the Atlanta Falcons. Despite falling behind 17-0 in the first quarter, the Titans fought back to force a 24-24 tie in the second half, only to watch Falcons running back Michael Ford score the game-winning touchdown on a one-yard run in the fourth quarter.

Rookie starting quarterback Marcus Mariota made his highly anticipated preseason debut against the Falcons. The second overall draft pick was victimized by two turnovers to begin the game—one drive ended with an interception and another with a fumble return for a touchdown. However, Mariota and the starting offensive cast rebounded to produce a 10-play, 80-yard touchdown drive on their third and final series of the evening.

Mariota was on the field for 19 plays, completing seven of his eight pass attempts for 94 yards (76.0 passer rating). On his third and final drive, he was a perfect 5-for-5 for 78 yards, including a 26-yard toss to running back Antonio Andrews to set up a touchdown on the next play.

With Mariota out of the game, Zach Mettenberger (8-of-11 for 129 yards) entered and engineered a pair of touchdown marches, including one that was capped by a 30-yard touchdown strike to wide receiver Rico Richardson. 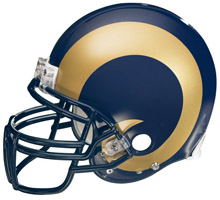 The Rams are led by a familiar face to Tennesseans, head coach Jeff Fisher. Fisher is in his fourth campaign in St. Louis after spending 16 full seasons as head coach of the Titans. This week marks his first return to Nissan Stadium since the final game of the 2010 campaign.

The Rams enter their second preseason game on the heels of an 18-3 road loss at the hands of the Oakland Raiders. New starting quarterback Nick Foles, who was acquired in an offseason trade with the Philadelphia Eagles, played two series and was 3-of-5 for 69 yards passing.

Titans-Rams Series At A Glance

Improve Ken Whisenhunt’s career record in the preseason to 11-20.

Give the Titans an all-time preseason record at Nissan Stadium of 24-9.

Give the Titans an 8-4 all-time lead against the Rams in the preseason.

Their initial encounter on October 7th, 1973, a 31-26 L.A. Rams victory, set the tone for the Rams to win seven of the first 10 contests, but the Titans have owned the most recent two matchups. The Titans achieved a 47-7 home win over the Rams on December 13th, 2009, the fifth-largest margin of victory in franchise history. Most recently, on November 3rd, 2013, they traveled to St. Louis and won 28-21.

In the regular season, the Titans and Rams have squared off only three times since meeting in Super Bowl XXXIV at the conclusion of the 1999 season.

The 2009 trip to Nashville for the Rams was their second ever in the regular season. The Rams visited Nissan Stadium during the 1999 regular season on October 31st, a game the Titans won 24-21. The outcome resulted in 6-1 records for both teams, and each squad would eventually finish the regular season 13-3.

In the Super Bowl on January 30th, 2000, the Titans and Rams produced one of the most thrilling games in postseason history. Titans wide receiver Kevin Dyson was tackled by Rams linebacker Mike Jones just short of the goal line on the game’s last play, preserving a 23-16 Rams victory. The play ended an inspired two-minute drive led by quarterback Steve McNair.

After the Rams took a 16-0 lead in the third quarter, the Titans charged back on two touchdown runs by Eddie George and then a 43-yard field goal by Al Del Greco with 2:12 remaining. On the first play from scrimmage after the field goal, Rams receiver Isaac Bruce broke free and scored on a 73-yard touchdown pass from Kurt Warner. McNair then led a 12-play, 87-yard drive that culminated in the completion to Dyson, one yard short of the end zone.

Chris Johnson rushed for 150 yards and a pair of touchdowns, helping the Titans defeat the St. Louis Rams 28-21 at the Edward Jones Dome.

As a team, the Titans totaled 198 yards and four touchdowns on 35 rushing attempts. In addition to Johnson’s 23 carries, Shonn Greene provided nine carries for 38 yards and a touchdown, while quarterback Jake Locker rushed three times for 10 yards and a score.

St. Louis nearly matched Tennessee’s rushing output, however. Rookie running back Zac Stacy reached the end zone twice and accumulated 127 of the Rams’ 160 yards on the ground. He added 51 yards on a team-high six receptions. His performance, along with a 20-of-35, 210-yard passing effort by Kellen Clemens, helped the Rams control the ball for nearly 33 minutes and mount three separate 80-yard scoring drives.

The Rams defense supplied several highlights as well, sacking Locker four times (all in the first half) and picking off two of his passes.

But it was the Titans who came up with the timelier plays. While Johnson was featured in the run game, Locker was five-of-seven on third-down pass attempts (13-of-22 total for the game) to help the team finish seven-of-12 on third downs (58 percent). He led the Titans to touchdowns on all four of their trips inside the red zone. Meanwhile, two defensive fumble recoveries helped swing the momentum back to the Titans at key moments.

On their opening drive of the game, the Titans moved quickly down the field to take their first lead, beginning with Johnson’s 23-yard carry on the game’s first scrimmage play. Helped by three penalties on the Rams, they went 68 total yards, concluding with a five-yard touchdown run by Greene.

The Rams seemed poised to answer with a score before committing the game’s first turnover. After driving from their own 20-yard line to the opposite 10, the ball slipped out of the hands of ball carrier Benny Cunningham, and Titans defensive back Coty Sensabaugh recovered.

However, the Rams came back with another long, methodical series, going 80 yards on 12 plays and using more than eight minutes to do so. Stacy punctuated the march with a game-tying, three-yard touchdown run two minutes into the second quarter.

The teams went back and forth through the end of the quarter without a score. Rams cornerback Cortland Finnegan notched an interception in Titans territory with 44 seconds remaining in the half, but then Greg Zuerlein missed the ensuing 44-yard field goal attempt.

The Rams took the lead for the first time early in the third quarter, receiving the opening kickoff of the half and driving 80 yards on 10 plays. From the nine-yard line, Stacy took his 21st handoff of the game and darted into the end zone.

Their advantage would not last long. The Titans responded with a 37-yard kickoff return by Damian Williams and an eight-play, 70-yard drive by the offense. Shortly after a 22-yard screen pass to fullback Collin Mooney, Johnson ran for a 14-yard touchdown.

With the score tied 14-14 at the start of the fourth quarter, Locker directed a 10-play, 71-yard drive that featured three third-down conversions, including a 20-yard pass to Williams on third-and-five. Johnson busted through the line for 24 yards, his long carry of the game, and finally, on third-and-goal from the five-yard line, Locker rushed across the goal line for a 21-14 lead.

The Rams answered with a 32-yard run by Stacy, which had a 15-yard penalty tacked on at the end for a horse-collar tackle by the Titans. Five plays later, Clemens found tight end Jared Cook in the end zone to help knot the score at 21 apiece.

On the Titans’ next offensive play, Locker found Kendall Wright for a 45-yard gain, but two plays later, he was intercepted by safety Rodney McLeod as the clock ticked under five minutes.

Needing a defensive stop, the Titans got one courtesy of defensive tackle Jurrell Casey. On third-and-seven from the St. Louis 24-yard line, Casey recorded his second sack of the game against Clemens and stripped the ball. Defensive end Derrick Morgan pounced on it for the Titans, and as soon as the offense took the field, Johnson scored the game’s final touchdown on a 19-yard run with 2:54 remaining.

The teams exchanged punts, giving the Rams a final shot at sending the game to overtime. But on fourth-and-four from the Tennessee 26, Clemens’ pass to Austin Pettis in the end zone fell incomplete.