“The importance of this ceremony and the significance of the role a command sergeant major has in the success of a battalion cannot be overstated,” said Lt. Col. David Waters, 1st Bn., 506th Inf. Regt. “The men and women [in formation] are Command Sgt. Maj. Michaud’s credentials. They represent some of the best trained Soldiers and leaders our Army has to offer.”

Waters credited the discipline and motivation of the Red Currahee Soldiers, in large part, to Michaud’s professionalism and commitment to excellence.

He said with Michaud’s help, they charted an effective path for the battalion that established a positive command climate while maintaining an operational tempo that included three iterations of platoon live-fires, the first company live-fire in more than five years, and month-long training deployments throughout the country. 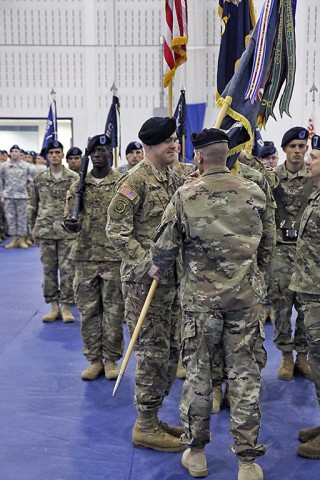 “Command Sgt. Maj. Michaud has led by example every day he has been on the job,” Waters said. “He walked every mile and shared every hardship in the field with our Soldiers.”

Through Michaud’s excellent leadership, the battalion had the most expert infantrymen badges earned within the “Bastogne” brigade and established a board program that yielded the brigade noncommissioned officer of the year, brigade medic of the year and the 101st Airborne Division Soldier of the year, Waters said.

“Al, I cannot thank you and Lori enough for your commitment to the men and women of the battalion,” Waters said. “Good luck in Hawaii.”

As the Soldiers of Red Currahee said goodbye to one family, they also welcomed a new one to the formation.

“As is always the case, these ceremonies are bitter sweet occasions,” Waters said. “For as much as we hate to say farewell to the Michauds, we are excited to welcome the Brashers to the family.”

“Command Sgt. Maj. Michaud, I appreciate the hard work you put in over the time you were here,” Brasher said. “Your efforts are reflected in the demonstrated effectiveness of this battalion. To the Soldiers of Red Currahee, I am humbled to be among you. I will endeavor to do my best by you.”

Brasher finished by saying he looked forward to serving with Waters in the coming months and continuing to make the Red Currahee formation great.

“Command Sgt. Maj. Brasher, I cannot wait to begin our time together as we prepare the battalion for its next rendezvous with destiny,” Waters said.