Des Moines, IA – APSU found out why Kansas is ranked No. 1 in the country, Thursday.

The Jayhawks used a 16-4 first-half run and were never headed as Austin Peay State University fell, 105-79, in South Region men’s basketball action played at the Wells Fargo Arena. The 31-4 Jayhawks will advance to play UConn in the Round of 32, Saturday.

The Governors, meanwhile, saw their magical late-season run end. APSU entered the game amidst a six-game winning streak, including four straight triumphs against higher-seeded teams in the Ohio Valley Conference tournament. In fact, the Governors were the first conference tourney No. 8 seed to not only gain an OVC tourney title but an NCAA bid as well.

And the game began slipping away from the Governors midway through the first half. A team that went 16 of 31 from 3-point range against UT Martin in the OVC tournament finals, the Govs missed their first seven three pointers against Kansas. 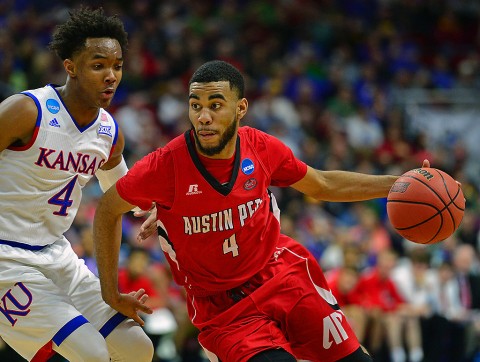 That wasn’t the recipe APSU was seeking. Their size disadvantage meant they needed perimeter production to help free up inside play for Chris Horton and Kenny Jones. The duo combined for just four buckets in the first half.

Finally with 22 seconds left in the half, Josh Robinson did a step-back three. By then Kansas was leading 46-28.

In the first half, Robinson was 5-of-9 from the floor; the rest of the Govs were 5-of-18. Robinson had 14 first-half tallies. No other Governor had more than four points while Perry Ellis had 13 and reserve Svi Mykhailuk had 11, including a trio of triples that extended the Jayhawks run. 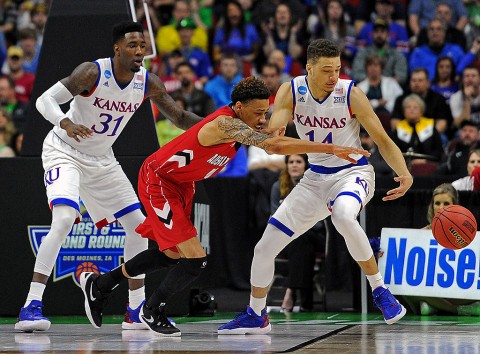 The Govs began finding the range in the second half, inside and the perimeter. But the Govs’ were no match for the Jayhawks duo of Ellis and Landen Lucas, who just muscled their way over and through APSU to steadily build a lead into the 20s. Ellis and Lucas combined for 14-of-19 shooting as APSU had no really answer for their deep post presence.

Kansas built the lead to 23, 53-30, early in the second half. But the Governors full-court pressure and aggressive half-court defense saw them whittled the lead to 15, 55-40, after a Horton steal and layup by Khalil Davis with 16:49 left in the half. It forced Kansas coach Bill Self to call a timeout and after the timeout, the Govs never could regain the momentum on both ends of the floor.

Seemingly anytime the Governors had a hint of a comeback, Lucas would work his way inside or Mykhailiuk would either hit a long jumper or drive to the bucket. He finished 9-of-11 from the floor in leading Kansas with 23 points while Ellis, who went 8-of-12, had 21.

It was the Govs’ Robinson who led all scorers with 24 points, including a trio of threes. Senior Chris Horton scored 10 second-half points to finish with 14 points and 10 rebounds—his season’s 25th double-double.

Junior John Murry continued his March emergence with 13 points off the bench while Davis ended his career with 12 points.

After shooting 37 percent in the first half, the Govs were a more respectable 15 of 34 (44 percent) in the second half. But that was no match for Kansas, which shot 56 percent for the game, including 22 of 35 (63 percent) in the closing half.

Kansas had 23 assists compared to just six for the Governors. APSU, which was out-rebounded 23-16 in the first half including 10 offensive grabs, actually held a 21-18 rebound advantage in the final half.

Kenny Jones in the locker room after the Govs loss to top-ranked Kansas.