Clarksville, TN – Sam McCracken, a 6-8, 190-pound forward from Cincinnati who helped lead his high school to a 24-5 record as a senior, has signed a letter of intent to play basketball at Austin Peay State University. 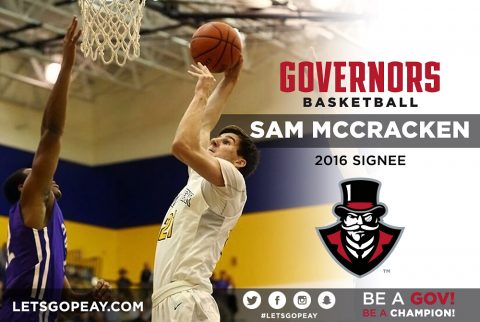 He earned honorable mention Southwest Ohio also as a senior. While at Moeller, he played for Carl Kremer and was part of teams that won a trio of league, sectional and district championships.

A member of the Cincinnati Lakers on the AAU circuit, McCracken is following in the footsteps of his father, Troy, who lettered four years (1986-89) at Dayton as a 6-9 center/forward.

“Sam has a great upside,” APSU coach Dave Loos said. “I believe he is still growing and can really shoot the ball. He will make a good stretch 4-man.

“He owns very good athletic ability and has played in a great program at Moeller—he is very well coached. He also comes from very good stock as his dad played at Dayton.”

McCracken is the second freshman frontcourt player the Govs have signed. In the fall, APSU signed 6-9 forward/center Jartavious Dobbs, who helped lead Columbus (Mississippi) High School to the Class 6A state championship.