Due to forecast inclement weather this weekend, the three-game set is scheduled to begin with a noon, Thursday doubleheader.

The Govs and Panthers will then play at 1:00pm, Friday contest to complete the series.

The Govs enter the final weekend with control of their own destiny. A series sweep of the Panthers would assure APSU a spot in next week’s eight-team OVC Baseball Championship. Even winning just two of the three contests would nearly book the Govs trip, though they would need a small amount of help.

Complete scenarios are below. 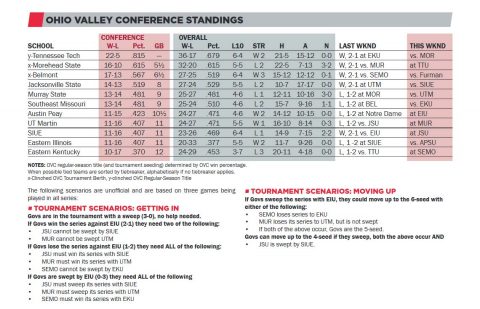 Austin Peay will travel to Charleston, Illinois for the first time since the 2013 season. The past three OVC series have been played in Clarksville, the Govs winning the last eight of those nine meetings.

In all, Austin Peay has won 12 of the last 13 contests dating back to the back-to-back shutouts in the 2012 OVC Baseball Championship. Overall, the Govs have built a 40-28 advantage in the all-time series, which dates back to 1978.

Redshirt junior left fielder Cayce Bredlau has reached safely in 21 consecutive games (.413 OBP, 23 H, 15 BB) dating back to April 1 and brings a 10-game hit streak (.324, 12-for-37, 6 RBI) into the weekend. Junior second baseman Garrett Giovannelli saw a 14-game hit streak come to an end against SIU Edwardsville, May 5th, and is battling a cold stretch that has seen him bat .132 (5-for-38) in the last nine games.

Sophomore Brett Newberg went 2-for-6 with three RBI in last week’s midweek outings against Evansville and Lipscomb but was has been held hitless (6 AB) since. Redshirt freshman Max Remy was responsible for all three RBI in the Govs victory at Lipscomb, Tuesday, it was his second three-RBI effort of 2017 and both times they accounted for all of APSU’s runs.

Senior utility man Alex Robles hit a grand slam for his season’s second walk off base hit in the Govs comeback win against Lipscomb, May 10th, but has been held to one base hit since (15 ABs). Sophomore catcher Alex Sala has started three of the Govs last four games behind the plate and is batting .333 (6-for-18) with five RBI since April 21st.

Freshman utility man Malcolm Tipler had a hit in the first two games of the Notre Dame series and is batting .286 (7-for-31) in May. Since April 1st, Junior center fielder Imani Willis is batting .314 (27-for-86) with 20 runs scored, including a 3-for-3 performance at Notre Dame, last Saturday.

Robles’ walk-off grand slam, May 10th, was the Govs 73rd home run this season, breaking the program’s single-season record set in 2001. It also was APSU’s first grand slam this season and nearly a year to the day since its last grand slam. The Govs enter weekend ranked No. 6 in home runs per game (1.47) among Division I teams.

Staff Notes
APSU pitchers continue their torrid strikeout pace, racking up 416 Ks through 458.2 innings this season. It is only the fifth time in program history a Govs pitching staff has recorded 400 strikeouts in a season, all occurring since 2011, with the record of 466 strikeouts set during the 2013 season. Their 8.16 strikeout rate currently ranks 85th nationally (6th in OVC).

It would be just the third time in program history a Govs pitching staff has averaged more than eight strikeouts per nine innings. With Kelly’s start Wednesday, 11 of the Govs 14 pitchers have started a game this season.

Starters
Redshirt sophomore Josh Rye will make his fifth straight start as the Govs No. 1 and he is 1-2 with a 4.50 ERA in his previous starts at No. 1. The southpaw is ranked seventh among OVC pitchers in victories and is ranked third in ERA (3.98) entering the weekend.

Sophomore transfer Jacques Pucheu will make sixth consecutive weekend start at Eastern Illinois. The lefty brings a 1-1 record and 6.41 ERA as a starter into this weekend’s set. Junior Zach Neff struck out 13 batters in two starts totalling 9.0 innings last week. He struck out a career-high eight in a six-inning start at Notre Dame, last Sunday.