He has taken his lifelong passion for superhero comic books and recently authored the first issue of a three part comic book series to complement teaching the Gang Resistance and Education Training (G.R.E.A.T.) program in elementary schools.

The series of TEAM G.R.E.A.T. comic books seeks to reach youth in an entertaining and compelling way, while addressing the lessons of the G.R.E.A.T program such as making good decisions, controlling anger, respect, etc. 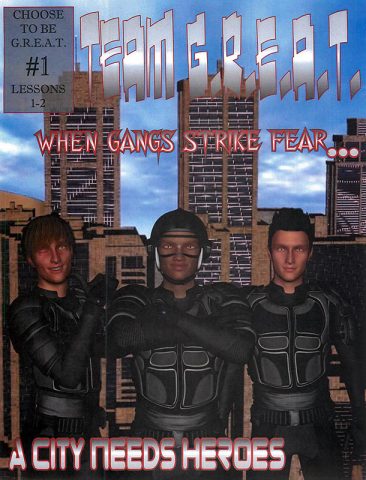 Aside from development of the comic books, Greg has come up with his own special way to promote the G.R.E.A.T. curriculum. He incorporates what is called “Feats of Encouraging Power and Strength” in which he rips decks of cards, phone books and license plates in half, and bends steel bars with his teeth.

The TEAM G.R.E.A.T comic book is digital and can be downloaded, free, from http://fb.me/gregscgicomics

Officer Greg Granderson has been with the Clarksville Police Department for 11 years. He has been a G.R.E.A.T instructor since 2012 and is assigned to the Clarksville Police Department’s Community Relations Unit. He is an ordained minister with a Masters of Divinity Degree and is a Chaplain with the U.S. Army, Kentucky National Guard. He is married and has two children.