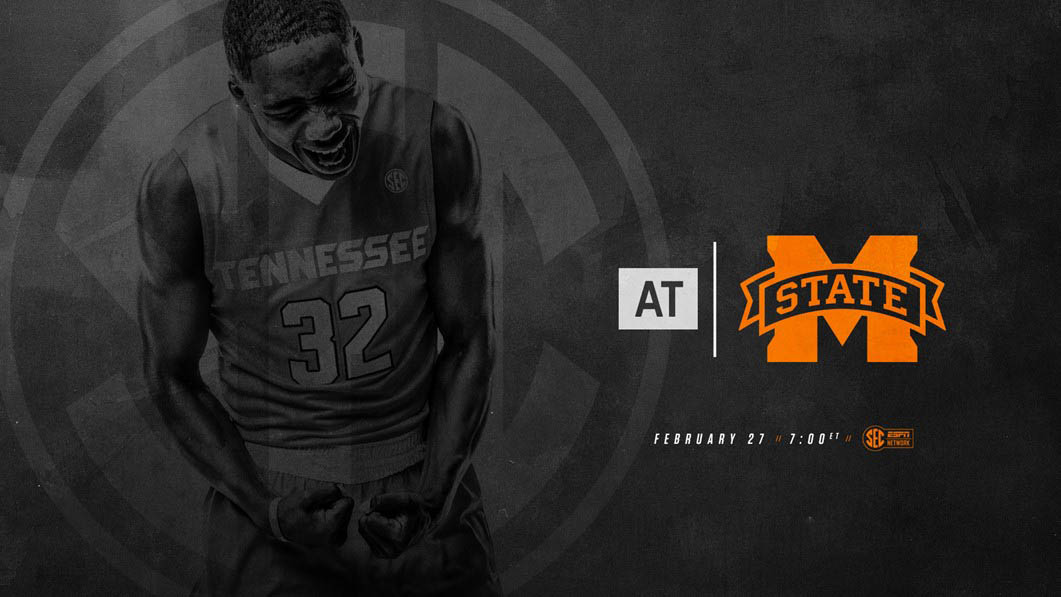 Starksville, MS – No. 16 Tennessee heads to Humphrey Coliseum to face one of the hottest teams in the SEC in Mississippi State on Tuesday night, February 27th. The game will tip at 6:00pm CT and will be televised live on SEC Network and streamed online via WatchESPN.

The Vols (21-7, 11-5 SEC) are coming off a pair of wins last week over Florida and Ole Miss. Admiral Schofield was named Co-SEC Player of the Week after averaging 20.5 points 7.5 rebounds and three assists in the wins. His week was highlighted by a dominant performance in Oxford during which he scored a career-high 25 points on an efficient 9-of-14 shooting en route to a 73-65 win over the Rebels. On the season, he ranks second on the team in scoring (12.8 ppg) and first in rebounding (6.9 rpg). 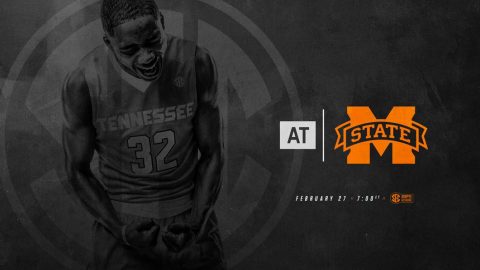 In his third season at the helm, veteran coach Ben Howland has done an incredible job leading the Bulldogs (21-8, 9-7 SEC) this season. Mississippi State is 7-2 over the last month, and between its men’s (18-1) and women’s (16-0) teams, MSU basketball owns a combined record of 34-1 at Humphrey Coliseum this season.

After Saturday’s showdown, the Vols return home for their regular-season finale and senior night in a rematch against Georgia on March 3rd at 5:00pm. The game will be televised on SEC Network.

The Vols are shooting .353 from 3-point range in SEC road games and average 6.8 makes.

Give the Vols at least six victories during the month of February for the first time since 2013.

Give Tennessee four wins in their last five trips to Starkville.

In his third season at the helm, veteran coach Ben Howland has done an incredible job leading the Bulldogs (21-8, 9-7 SEC) this season. Considered one of the hottest teams in the SEC right now, Mississippi State is 7-2 over the last month. During that stretch, the Bulldogs have won games against Alabama, Georgia, Missouri and Texas A&M.

Junior All-SEC performer Quinndary Weatherspoon has been State’s best player this season, averaging 14.7 ppg, 6.0 rpg, 3.7 apg and 1.5 spg. The 6-4 guard ranks third in the SEC this season in shooting percentage (.495) and fifth in steals (44).

Quinndary and his younger brother, Nick Weatherspoon, are the only two players to start every game for the Bulldogs this season. Nick is posting 11.1 ppg while shooting 48 percent overall.
Mississippi State boasts one of the tallest squads in the league this season, anchored by 6-11 forward Abdul Ado (8.1 ppg, 6.8 rpg, 2.0 bpg) and 6-10 forward Aric Holman (10.9 ppg, 6.6 rpg, 1.5 bpg) in the frontcourt.

In their last outing, the Bulldogs erased a 13-point deficit to force overtime at home against South Carolina on Saturday. MSU never trailed in overtime en route to a 72-68 win. Lamar Peters led the way with 19 points, five assists, four boards and four steals.

Between its men’s (18-1) and women’s (16-0) teams, Mississippi State basketball owns a combined record of 34-1 at Humphrey Coliseum this season.

Poor free-throw shooting and a sluggish second half spelled trouble for Tennessee as Mississippi State snapped the Vols’ four-game winning streak with a 64-59 victory on February 4th, 2017, at Humphrey Coliseum.

Fellow freshman Grant Williams was the only other Vol in double figures, finishing with 11 points.

UT led by as many as 19 in the first half, but saw the lead slip away in the second period as MSU took control inside. The Bulldogs finished the game with 28 points in the paint, 22 of which came in the second half. MSU also controlled the glass, out-rebounding the Vols by a 55-45 margin, including a 31-17 edge in the second half.

The Vols, who shot a season-worst 45.5 percent (10-of-22) from the foul line had difficulty weathering Mississippi State’s second half runs. Chipping away at the deficit, MSU got to within single digits with 11:26 to play after Schnider Herard hit two free throws. Tennessee answered with a Williams jumper and two free throws from Jordan Bowden, but the Bulldogs countered with a 12-1 run that tied the score at 51-51 with 6:10 on the clock.

Over a minute later, Bone broke the deadlock on a drive to the basket, but MSU knocked down threes on its next two possessions to take a 57-53 lead it would never surrender.

Tennessee controlled the first half, racing out to a 17-2 lead. The Vols would lead by double figures for the remainder of the frame, pushing the advantage to 29-10 at the 4:50 mark.

In his two career games against Mississippi State, Jordan Bowden averages 10.4 points and 4.0 rebounds in 27.5 minutes per game.

Admiral Schofield has played three previous games against the Bulldogs, averaging 7.7 points and 5.0 rebounds while shooting .615 percent overall and .500 from 3-point range.

In two previous games against MSU, Grant Williams averages 14.0 points and 3.5 rebounds in 23.5 minutes per game.

Tennessee Was Picked 13th In SEC

Tennessee was predicted to finish 13th in the 2018 SEC race by an SEC and national media voting panel. The Volunteers also were picked 13th last season before posting an 8-10 SEC record to finish ninth.

The Vols have outperformed their preseason SEC projection every season under head coach Rick Barnes.

Tennessee Has Been A Big Draw On The Road This Season

Tennessee has played in front of four road sellouts this season. Three of those came in SEC play (Missouri, South Carolina and Alabama), while the other came at Iowa State in the Big 12/SEC Challenge.

While UT’s game at Kentucky wasn’t technically a “sellout,” the crowd of 23,332 filled Rupp Arena to 99.3 percent capacity. Through Tennessee’s 11 true road games this season, the crowd has been at an average capacity of 91.9 percent.

Tennessee also recorded 21 regular-season victories for the first time since 2009-10 (23).

In 31 seasons as a Division I head coach, Rick Barnes has now led his teams to 20 or more wins 20 times.

Respected statistical analyst Ken Pomeroy of KenPom.com rates Tennessee fourth in the nation in defensive efficiency, which is the number of points allowed per 100 possessions.

There are only about 70 possessions for each team in the average college basketball game, so these numbers are higher than the “ppg” statistics commonly used by media.

Tennessee could boast three players with 50 or more made 3-pointers for the first time since the 1999-2000 season.

Lamonté Turner already has 55 made triples, while Admiral Schofield has 48, and Jordan Bowden has 47.

That 1999-2000 squad finished with a  26-7 (12-4 SEC) record, won a share of the SEC regular-season championship and advanced to the Sweet Sixteen before falling to North Carolina in Austin, Texas.