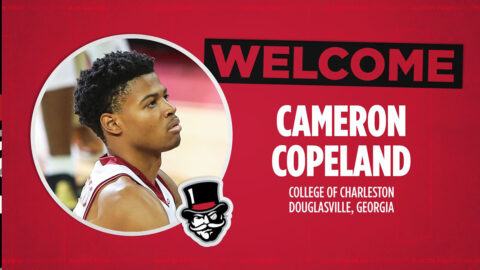 Copeland spent the abbreviated 2020-21 season as a pivotal part of the College of Charleston attack, appearing in all 18 games while averaging 15.9 minutes, 5.6 points, and 2.9 rebounds per game for the Cougars under the tutelage of Earl Grant, who recently departed for Boston College.

Copeland found his way into double figures five times during his tenure as the Cougars top reserve, including back-to-back double-digit efforts against Towson in early February.

Prior to his time in Charleston, Copeland was a North Texas Junior College All-Conference First Team selection after leading the Highlanders with 13.1 points per game. He also spent a season at North Florida, making 12 appearances for the Ospreys.

In his prep days, Copeland was honored as an all-region selection leading Douglas County to a 22-7 overall record and trip to the regional finals. As a senior, he shot 46 percent from the field, 36 percent from the 3-point line, and 76 percent at the free-throw line.

“Cam is a gifted athlete blessed with a very versatile skill set that gives him the ability to do anything on the basketball court,” James said. “At 6-7 with a 7-0 wingspan, his length and athleticism allow him to guard all positions on the floor. I’m looking forward to coaching and developing this young man into one of the best players in the OVC. He is a terrific young man that takes great pride in being a student-athlete. He’s also very active in his community, volunteering his time to help give back in any way he can. He will be an amazing addition to our basketball program and university.”

Copeland joins Caleb Stone-Carrawell as the foundational pieces for James’ first recruiting class as head coach of the Governors.

“I am very excited about coming to Austin Peay and playing under Coach James,” Copeland said. “He’s coached a lot of the game’s biggest stars today such as Kyrie Irving, Jayson Tatum , Brandon Ingram and Zion Williamson. I am looking forward to learning from him and competing for OVC championships.”