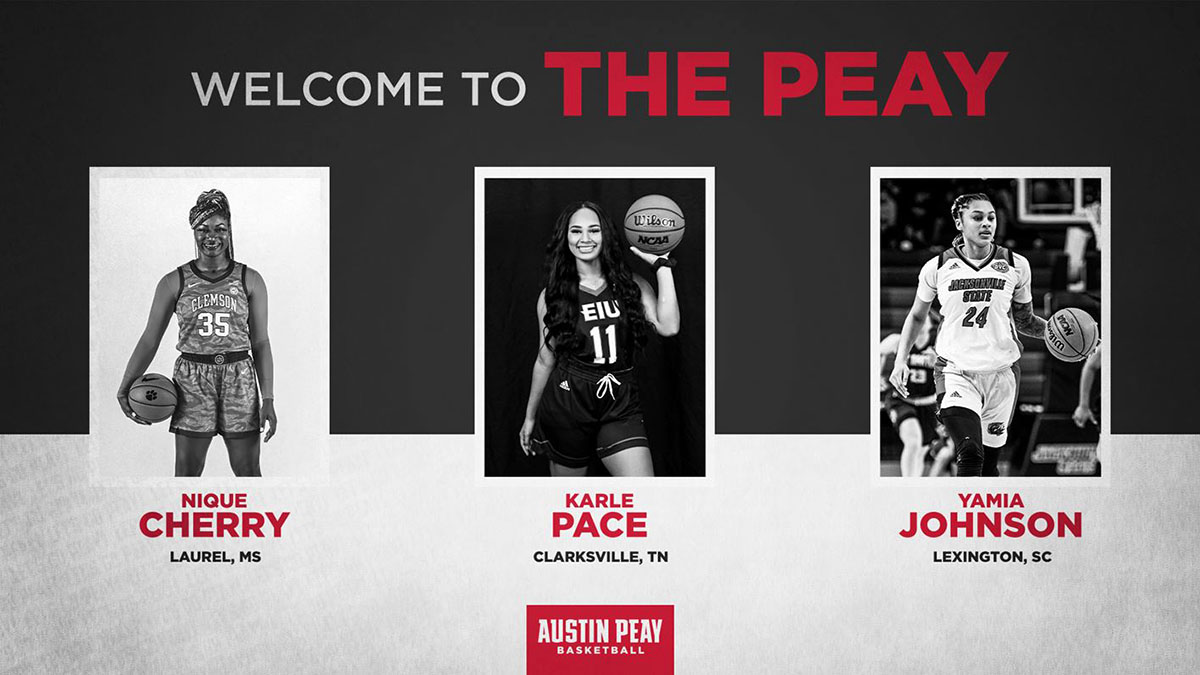 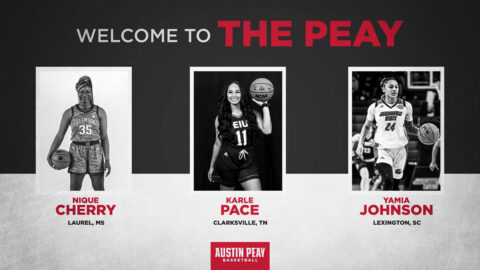 Young’s first addition as the Govs head coach, Cherry comes to Clarksville after spending the past two seasons at Clemson.

“Nique is a player that my staff and I were very familiar with from her time at Jones Community College, where she was a consistent double-double threat,” said Young. “She has the potential to be one of the more athletic players in our conference and her experience at the Power 5 level will be invaluable.

“My staff and I love that Nique is joining our program during this critical juncture with a sense of urgency and something to prove. The aggression and passion she displays on the floor will be contagious. Nique is ready to come in, work, and lead by example. We are looking forward to challenging her daily in order to help her achieve her goals.”

Prior to her two years at Clemson, Cherry played a pair of seasons at Jones County Junior College in Ellisville, Mississippi. Cherry started in all 62 games she played for the Bobcats, posting 44 career double-doubles, while averaging 14.5 points and 13.0 rebounds per game over two seasons.

In her first season at Jones County, Cherry was named a NJCAA Division I Honorable Mention All-American, she followed that up by receiving NJCAA Third-Team All-American honors in 2018. During her junior college career, Cherry was named the Mississippi Association of Community & Junior Colleges Women’s Basketball Player of the Week five times.

In her second season with the Tigers, Cherry played 14 minutes per game in 25 appearances for coach Amanda Butler. Cherry averaged 3.7 points and 4.0 rebounds per game, while shooting 50.8 percent from the floor in her senior campaign.

In one of her final games at Clemson, Cherry came off the bench and scored a career-high 13 points, grabbed seven rebounds, and was a perfect 5-for-5 from the floor against Virginia Tech, February 25th.

“Yamia is an individual that has established herself as one of the premiere players in the OVC,” said Young. “She naturally rises to the occasion in big moments and her versatility will allow us to play her in various positions within our system.  She is truly a special talent.

“What my staff and I love the most about Yamia is that she is a visionary.  Her aspirations for this program align with our goals and it is that type of player-initiated thinking that we will need to push the needle and move our program in the right direction.”

During the 2020-21 season, Johnson averaged 14.9 points per game to lead the Gamecocks and rank fourth in the OVC. Johnson also ranked sixth in the OVC in field-goal percentage, shooting 42.5 percent from the floor in her final year at Jacksonville State.

One of the top three-point shooters in the league last season, Johnson led the OVC in three-point percentage (39.4%) and ranked second behind APSU’s Maggie Knowles (2.7 3PG) in three-pointers made per game (2.3). Johnson and Knowles were two of the five OVC women’s basketball players to make 50-plus three-pointers during the 2020-21 season.

In three seasons at Jacksonville State, Johnson has posted a game of at least 25 points each year, starting with a 27-point outing in her freshman campaign against Montevallo (11/27/18). As a sophomore, Johnson dropped a career-high 32 points at UT Martin (2/8/20), before scoring a season-high 29 points against Tennessee State (1/14/21) in her junior season.

In a pair of games against Austin Peay State University in her junior season, the Lexington, South Carolina native averaged 17.5 points, 6.0 rebounds, and 2.5 made triples per game. In her collegiate career, Johnson is averaging 10.2 points, 2.4 rebounds, and 1.5 made three-pointer per game, while shooting 37.7 percent from the floor and 33.2 percent from behind the arc.

Finally, a Clarksville-native and 2019-20 First Team All-OVC selection, Pace joins the Govs after spending the past four seasons at Eastern Illinois.

“Anytime you have an opportunity to recruit a prospect with Karle’s basketball resume, it is a positive move for your program,” said Young. “However, when that decision allows a local favorite to return home and compete in front of her friends and family, it becomes a positive move for an entire community.

“Karle will bring veteran leadership and experience to our program. My staff and I love that she’s a competitor, but the attribute I’ve grown to admire the most about her is her selflessness.  She makes every decision with her teammates in mind, and that mentality will only make our team stronger.”

Averaging 12.6 points per game during four years at Eastern Illinois, Pace posted a game of at least 27 points in each season, starting with a 31-point explosion against Tennessee State (1/27/18) during her freshman year. Pace then went on to score season-highs of 29 points against Eastern Kentucky (1/31/19) as a sophomore and 27 points against Morehead State (2/8/20) as a junior, before dropping a career-high 32 points on Eastern Kentucky (1/16/21) in her senior campaign.

Pace has been one of the OVC’s top-ten scorers in each of the last three seasons, with the 5-8 guard enjoying her best season in 2019-20, when ranked a career-best sixth in the league in scoring (15.0 ppg). Pace also ranked second in three-point percentage (41.6%), third in steals (2.1), and seventh in three-pointers made per game (2.0) during her All-OVC season.

In eight career games against APSU, Pace is averaging 10.8 points, 3.1 rebounds, and 3.1 assists per contest. The hometown product also scored 19 points against the Governors in both games during her junior season and drilled five three-pointers in the game played at the Dunn Center on February 1st, 2020.

Pace will be the first APSU Governor from Clarksville since Jemiah Harrison during the 2017-18 season; both attended Rossview High School. During her prep career, Pace was a four-time All-Area selection and helped lead the Hawks to three-straight District 10-AAA regular season and tournament titles. As a freshman at Rossview, Pace helped the Hawks make their first ever Tennessee Class 3A State Tournament appearance.