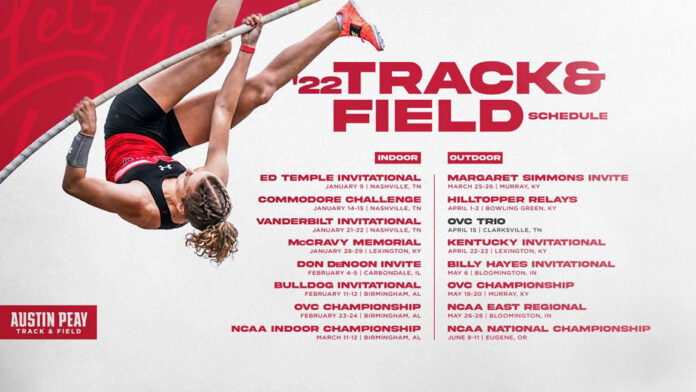 The APSU Govs kick-off the indoor season on Sunday, January 9th at the Ed Temple Invitational in Nashville before back-to-back weekends on the campus of Vanderbilt University. Austin Peay State University is set to compete in the Commodore Challenge, January 14th-15th before the Vanderbilt Invitational, January 21st-22nd.

Austin Peay State University then heads to Lexington, Kentucky to take part in the McCravy Memorial, January 28th-29th. The following weekend the Govs travel to the Don DeNoon Invite in Carbondale, IL, February 4th-5th.  Following its indoor meet in Carbondale, IL, APSU will have the next three meets in Birmingham, AL. First, will be the Bulldog Invitational, hosted by Samford University on February 11th-12th before the OVC Championships on February 23rd-24th.

APSU hopes to round out the indoor season on March 11th-12th at the NCAA Indoor Championships. The Govs will enjoy a weekend off before starting the outdoor season on March 25th-26th at the Margaret Simmons Invite in Murray, KY. The Govs make a return trip to Kentucky the following weekend for the Hilltopper Relays, April 1st-2nd.

The Govs will host Tennessee Tech and Murray State as part of an OVC Trio meet in Clarksville on Friday, April 15th. It will be the first time the Govs have hosted an outdoor meet since the APSU Invitational back in 2019. APSU travels to the Kentucky Invitational (April 22nd-23rd) and Bill Hayes Invitational (May 6th) before the OVC Championships (May 18th-20th) in Murray, KY.  Last season the Govs earned 68 points en route to a sixth-place team finish at the conference championships.

The NCAA East Prelims take place May 26th-28th in Bloomington, IN at Billy Hayes track. The NCAA National Championships are June 8th-11th in Eugene, OR, at Hayward Field.