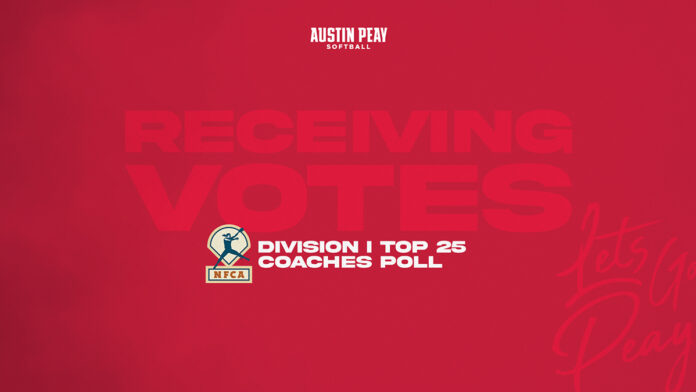 Louisville, KY – After going 4-1 in its opening weekend of play, the Austin Peay State University (APSU) softball program earned a bit of history on Tuesday morning in receiving votes for the first time ever in the USA Today/National Fastpitch Coaches Association Division I Poll.

The Governors received two votes in the Week 1 poll that is voted on by 32 NCAA Division I head coaches, with one representing each of the NCAA’s Division I Conferences, putting them 36th overall.

“After one week of play we are excited to hear that we are receiving votes,” APSU head coach Kassie Stanfill said. “This is just the beginning for Team37, and as we all know, we have a long season ahead of us. We will continue to keep our heads down and work hard, but we will always remember being the first in program history to earn this honor.”

It is the first time since March 2010 that an Ohio Valley Conference softball team has received votes in a national NCAA Division I poll and the first in the 37 years of the Austin Peay State University softball program they have received a vote in a national poll.

Defending national champion Oklahoma was the unanimous No. 1 in this week’s poll with future Govs opponent this season, Tennessee, ranked 18th in the poll.

For news and updates on everything Austin Peay State University softball, follow along on Twitter (@GovsSB) or check back at LetsGoPeay.com.