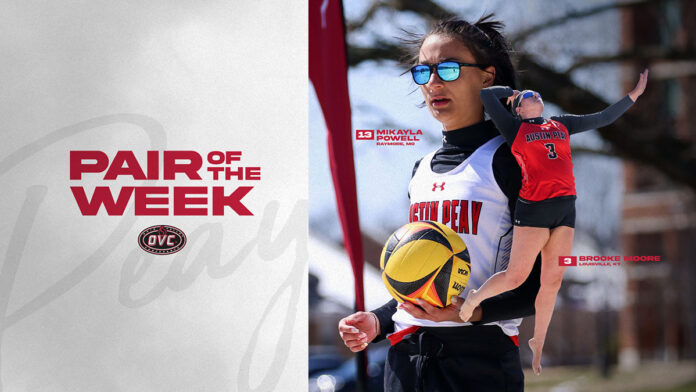 Moore and Powell posted a perfect record at the OVC Weekend at Chattanooga and helped the Governors go 3-1 at the first conference event. Moore and Powell dropped just one set during their four matches while playing exclusively in the No. 2 position for Austin Peay State University.

In the nine sets Moore and Powell played, they held their opponents to 15-or-less points in five sets while allowing just 16.0 points per set in their four matches. Moore and Powell are currently on a team-best seven-match winning streak and lead the Governors with a team-high seven wins this season.

Moore, a native of Louisville, Kentucky, and Powell, a native of Raymore, Missouri, are the third tandem in program history to be named the OVC Pair of the Week and are the first since Marlayna Bullington and Kelsey Mead were named pair of the week, March 15th.

Moore and Powell are the Co-OVC Pair of the Week, sharing the weekly honors with UT Martin’s Dylan Mott and Karen Scanlon, who went 3-1 in the No. 1 position for the Skyhawks last week.

Austin Peay State University beach volleyball is back in action when it hits the road for the EKU Beach Tournament, Friday-Saturday, hosted by Eastern Kentucky in Richmond, Kentucky.