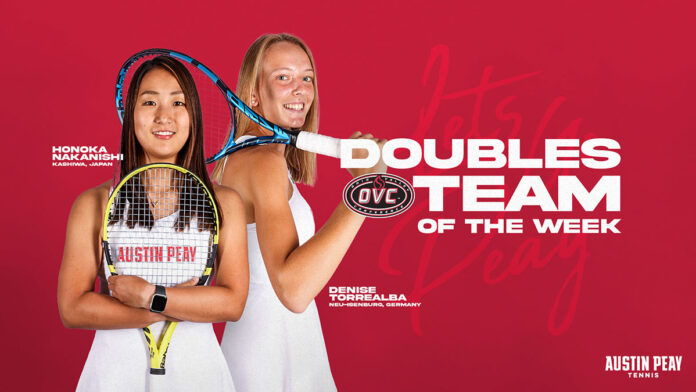 Torrealba and Nakanishi began their weekend with a commanding 6-1 victory against Eastern Illinois’ Rachel Papavasilopoulos and Addison Brown, Saturday.

After finding themselves in an unfamiliar position, trailing 3-0, in Sunday’s match against SIU Edwardsville’s Jill Lambrechts and Maria Thibault, Torrealba and Nakanishi rallied to win six-straight games and earn their team-best eighth win of the season.

Torrealba and Nakanishi have won seven-straight matches, including all six since being elevated to the No. 1 position, on March 8th.

In their winning streak, the Govs’ top tandem has only allowed their opponents to win four or more games once and have defeated their last seven opponents by an average score of 6-2.

In addition to her perfect weekend in doubles, Torrealba also was perfect in singles play from the No. 1 position.

After splitting her first two sets against Papavasilopoulos in Saturday’s match against the Panthers, Torrealba defeated the 2019 OVC Player of the Year and two-time First Team All-OVC recipient, 6-2, in the third to claim her first career OVC win.

The Neu-Isenburg, Germany native then defeated SIUE’s Jordan Schifano – a 2021 Second Team All-OVC selection – in straight sets the following day to claim her eighth win of the season and sixth from the No. 1 position.

The weekly honor is the first for both Torrealba and Nakanishi. The duo becomes the 13th and 14th players to win an OVC weekly award under head women’s tennis coach Ross Brown.

Torrealba, Nakanishi, and the rest of the Austin Peay State University women’s tennis team are back in action with a pair of OVC matches, Friday and Saturday. The Govs face UT Martin on Friday in a 2:00pm match at the Skyhawk Tennis Complex in Martin, Tennessee, followed by a 1:00pm contest against Southeast Missouri at the Redhawks Tennis Complex in Cape Girardeau, Missouri.