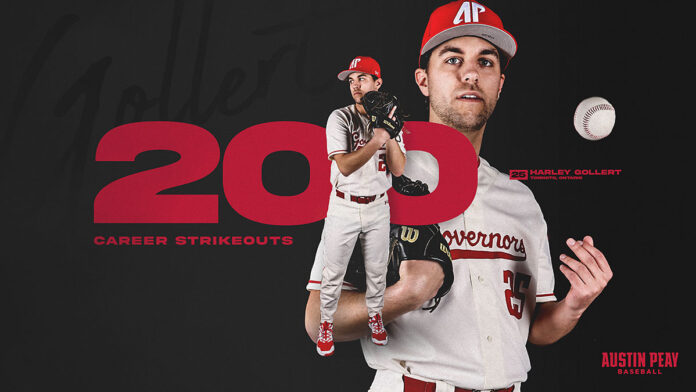 Austin Peay (17-30, 8-9 OVC) was held to a pair of hits and four walks by Wynja. The APSU Govs had scoring opportunities in the third, fourth and fifth innings but could not breakthrough on the scoreboard.

Wynja (5-3) tossed his first complete game of the season, opening by retiring the first eight batters he faced. Austin Peay State University would put two runners on base in the third with two outs but he notched a strikeout to end the threat. The next inning it was back-to-back walks that gave the Govs a scoring opportunity, but Wynja notched another strikeout and pop out to escape the jam.

The Govs would get a man to third base in the fifth inning, as left fielder Gino Avros took advantage of a wild pitch and an error to get to third with two out. But another Wynja strikeout ended the Govs last scoring threat.

Gollert would bounce back with three scoreless innings. His strikeout of Gardner in the fourth inning was his sixth of the game and 200th career strikeout. Gollert became the ninth Govs pitcher to post 200 strikeouts.

Murray State scored twice against in the fifth with third baseman Bryson Bloomer batting in both runs on his single. The Racers tacked on a final three runs in the eighth against the Governors bullpen.

Wynja held the Govs to two hits and four walks while striking out seven batters. He faced 32 batters in his complete game effort as the defense provided two double plays.

Gollert finished the game with nine strikeouts in his six innings, allowing four runs on six hits and a walk.

Shortstop John Bolton went 1-for-2 with a walk and catcher Jack Alexander was 1-for-3 with a walk to pace the APSU Govs offense.

Bloomer was 3-for-4 with three RBI to lead Murray State’s offense.

Austin Peay State University baseball and Murray State, who have split the first two games of the three-game set, play the rubber game of the weekend with a Sunday 1:00pm contest at The Hand.