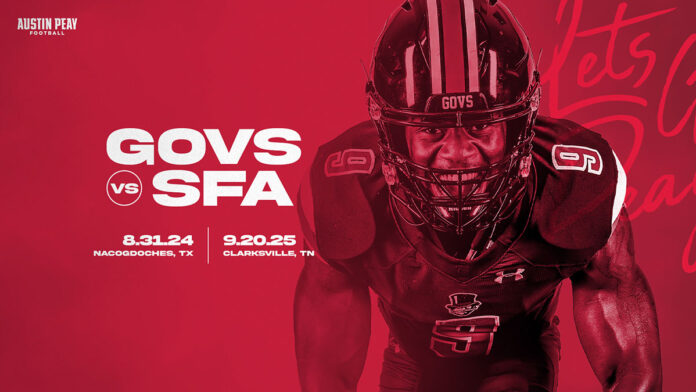 Clarksville, TN – The Austin Peay State University (APSU) football team will battle Stephen F. Austin for the first time in program history when it plays a home-and-home series during the 2024 and 2025 seasons, the athletics department announced Wednesday.

The Govs travel to the Nacogdoches, Texas on August 31st, 2024 to take on the Lumberjacks at Homer Bryce Stadium. Stephen F. Austin returns the trip with a September 20th, 2025 date at Fortera Stadium in Clarksville.

“This home-and-home series with Stephen F. Austin will provide our football team opportunities to prove themselves against a good FCS opponent early in the season,” said Austin Peay State University Vice President and Athletics Director Gerald Harrison. “The trip to Texas also allows us to get Coach Walden back in his home state where we can showcase Austin Peay State University to a brand-new audience.”

The Lumberjack’s return trip to Clarksville in 2025 joins a pair of road non-conference games for the Governors at Georgia (September 6th) and Middle Tennessee (September 13th).

To see all of Austin Peay State University’s future nonconference foes, visit the Future Dates of the football schedule on LetsGoPeay.com. For news and updates on APSU Governors football through the offseason, follow along on Twitter (@GovsFB) and Instagram (@GovsFootball).