HomeOpinionThe Leaf Chronicle: Get the facts before discussing Iraq
OpinionPolitics

The Leaf Chronicle: Get the facts before discussing Iraq 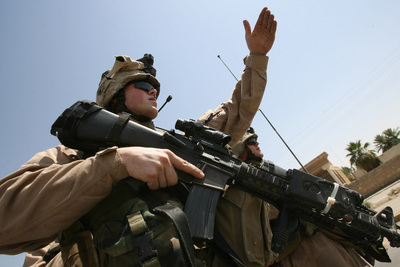 The Leaf Chronicle has a checkered history, especially when you look their statements in reference to our military misadventures in Iraq. As recently as June, they suggested that those who oppose the war should just shut up. Today they attacked those who are still calling for our troops to be brought home out of harms way.

The Leaf Chronicle statements demonstrate that they are sadly ignorant of the true situation on the ground in Iraq.

President Bush frequently defers questions about the surge by explaining that we must wait for that progress report from Petraeus.

Many Senate Republicans also have said they are waiting on the report before making any decisions regarding withdrawals..

…Such a strategy would make sense. The United States cannot simply pull up and leave Iraq overnight. Anyone who thinks that is hopelessly naive. – The Leaf Chronicle, Don’t reverse Iraq surge too quickly

Embarrassing things like this can happen when you drink the kool-aid served to you by the Bush administration and their lackeys in the corporate media. Lets take this editorial and break it down piece by piece and see what the facts really show.

The 30,000 U.S. troops deployed earlier in this year eventually will be drawn down. But if the troop surge is reversed too quickly, it also could reverse all of the progress that has been made this year.

The first step is that we must come up with a generally understood and accepted definition of what constitutes progress. The media has frenquently repeated grand statements like “victory” and now “progress” without understanding what do they really mean, thus the public is left confused, a state that the spinmeisters prefer. It’s fine for politicians to make vague statements, but the real world works on specifics.

Indeed, how can we have a meaningful gauge of the situation in Iraq, without everyone being on the same page, reading from the same book. Lets see a checklist, one which can not be changed or even tossed out depending on which way the political winds are currently blowing. That my friends would be real progress!

The administration’s initial definition of progress was, training the troops. Indeed we spent over 19.2 billion dollars training the Iraqi police and army units since 2003. Let’s take a look at where that has gotten us.

A Government Accounting Office report that came out last month found that since 2003, the U.S. gave $19.2 billion to train Iraqi forces. This was accomplished through emergency funding and a shoddy record keeping plan that is now coming back to haunt us. It seems there are serious discrepancies between what the U.S. commanders in Iraq said was issued and what was written in the property books.

Most of these missing tools of war have likely gone to equip the insurgent forces fighting our troops in Iraq. Indeed the Iraqi police and soldiers we have spent so much taxpayer money training, have often actively been assisting the insurgent forces in killing our brave troops. Soldiers from the 82nd Airborne laid it out for us in a recent New York Times op-ed:

…This situation is made more complex by the questionable loyalties and Janus-faced role of the Iraqi police and Iraqi Army, which have been trained and armed at United States taxpayers’ expense.

A few nights ago, for example, we witnessed the death of one American soldier and the critical wounding of two when a lethal armor-piercing explosive was detonated between an Iraqi Army checkpoint and a police one. Local Iraqis readily testified to American investigators that Iraqi police and Army officers escorted the triggermen and helped plant the bomb. These civilians highlighted their own predicament: had they informed the Americans of the bomb before the incident, the Iraqi Army, the police or the local Shiite militia would have killed their families.

As many grunts will tell you, this is a near-routine event. Reports that a majority of Iraqi Army commanders are now reliable partners can be considered only misleading rhetoric. – The War as We Saw It By SPC. Buddhika Jayamaha, SGT. Wesley D. Smith, SGT. Jeremy Roebuck, SGT. Omar Mora, SGT. Edward Sandmeier, SSGT. Yance T. Gray and SSGT. Jeremy A. Murphy of the 82nd Airborne in the NYTimes

Indeed their view of the situation in Iraq is downright pessimistic. Yep, I guess the Conservative Republicans were right in the end, the media hasn’t been telling us the truth about what’s going on in Iraq; they have been sugar coating it…

To believe that Americans, with an occupying force that long ago outlived its reluctant welcome, can win over a recalcitrant local population and win this counterinsurgency is far-fetched. As responsible infantrymen and noncommissioned officers with the 82nd Airborne Division soon heading back home, we are skeptical of recent press coverage portraying the conflict as increasingly manageable and feel it has neglected the mounting civil, political and social unrest we see every day. (Obviously, these are our personal views and should not be seen as official within our chain of command.) – The War as We Saw It By SPC. Buddhika Jayamaha, SGT. Wesley D. Smith, SGT. Jeremy Roebuck, SGT. Omar Mora, SGT. Edward Sandmeier, SSGT. Yance T. Gray and SSGT. Jeremy A. Murphy of the 82nd Airborne in the NYTimes

Now, this administration and their enablers are down to grasping at the straws of progress at the local level, while still ignoring the major problems affecting the lives of the average Iraqi. Things like power, security considerations, running water, sewer service, access to gasoline in one of the most oil rich nations in the world.

At the same time, the most important front in the counterinsurgency, improving basic social and economic conditions, is the one on which we have failed most miserably. Two million Iraqis are in refugee camps in bordering countries. Close to two million more are internally displaced and now fill many urban slums. Cities lack regular electricity, telephone services and sanitation. “Lucky” Iraqis live in gated communities barricaded with concrete blast walls that provide them with a sense of communal claustrophobia rather than any sense of security we would consider normal.

In a lawless environment where men with guns rule the streets, engaging in the banalities of life has become a death-defying act. Four years into our occupation, we have failed on every promise, while we have substituted Baath Party tyranny with a tyranny of Islamist, militia and criminal violence. When the primary preoccupation of average Iraqis is when and how they are likely to be killed, we can hardly feel smug as we hand out care packages. As an Iraqi man told us a few days ago with deep resignation, “We need security, not free food.” – The War as We Saw It By SPC. Buddhika Jayamaha, SGT. Wesley D. Smith, SGT. Jeremy Roebuck, SGT. Omar Mora, SGT. Edward Sandmeier, SSGT. Yance T. Gray and SSGT. Jeremy A. Murphy of the 82nd Airborne in the NYTimes

And even at the local level, progress is slow. In his report to Congress earlier this month, the special inspector general for Iraq reconstruction said rebuilding is being crippled by power plant problems, mismanagement, corruption and weak spending on capital projects by Iraq’s central government ministries and its provinces.

Let’s conclude our dissection of the Leaf Chronicle Editorial with this:

There’s a tremendous amount of pressure resting on the shoulders of the former Fort Campbell commander. Not only is Petraeus the top U.S. commander in Iraq, but the eyes of the world will be on him and the report he presents to Congress next month on the war’s progress.

But that’s not really correct either, is it? You see, General Petraeus will not be writing the report that he will be presenting to Congress. Instead, he will be presenting a report which he had input on, but that was authored and compiled by the same political hacks in the White House who have been lying to the American people, Congress, and the world since this war began.

Those positions only hardened yesterday with reports that the document would not be written by the Army general but instead would come from the White House, with input from Petraeus, Crocker and other administration officials.

“Americans deserve an even-handed assessment of conditions in Iraq. Sadly, we will only receive a snapshot from the same people who told us the mission was accomplished and the insurgency was in its last throes,” warned House Democratic Caucus Chairman Rahm Emanuel (Ill.). – An Early Clash Over Iraq Report: Specifics at Issue as September Nears By Jonathan Weisman and Karen DeYoung of the Washington Post

Rahm Emanuel is right: we do deserve, and our soldiers should be able to expect, a neutral presentation of the facts, letting us make up our own mind on the information presented. But I do not think we will get that from our infamous “I do not recall, Senator” Administration.

Our troops can’t and shouldn’t be expected to police a civil war in a foreign land. They are setup in a situation where they are friendless, bound to fail, and targeted by all sides. Our troops are being injured and killed  in order to protect politicians and the politiically connected groups and organizations which benefit from this war being continued. There is only one way left to truly support the troops: bring them home now!

The Leaf Chronicle Editorial board should spend some time, and do more research, before penning future op-eds. If they do so, then perhaps they won’t be wrong on the facts, and they will appear to be better educated, when they discuss situations like these with the residents of our city.