Do yourself a big favor: watch Ken Burns’ newest documentary, The War. 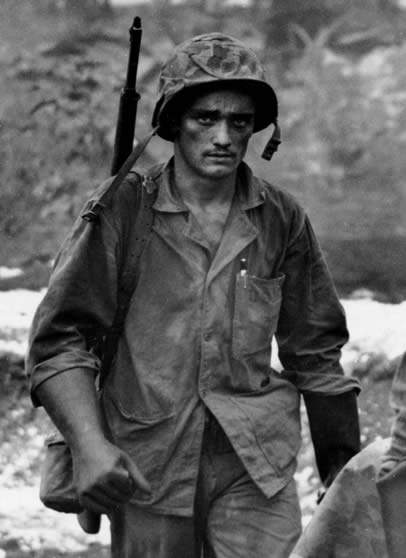 In it, Burns captures the American experience of WWII in the words of those who actually fought in the war, or who experienced it on the home front. Be forewarned, it intense and, at times, hard to view.

I came away from the first episode with a feeling of pride and sadness. Pride in what we as a nation were back then; in the men and women who sacrificed, fought, and died to preserve freedom in the world. In their dedication and steadfastness in the face of what seemed then like insurmountable odds. Sadness at how far we have come since then.

The overwhelming sense conveyed by the men and women who recounted their experiences in that great conflict was that of being in it together, of shared sacrifice. Not once during the first episode did I hear anyone complain of how hard it was, what an imposition it was on them to have their world turned upside down and, often, to be thrust into what seemed as close to hell on earth as you can come. Some of the things they recounted were horrible, but never did I detect a hint of self-pity.

Our soldiers today are every bit as brave as those who served in WWII. They face danger daily and do not shirk their duty. But they are being let down by those at home. The sacrifice is not shared: rather than urging sacrifice, the president tells us to go shopping. We are told that this is the most important conflict of our time, but our leaders seem intent on waging war on the cheap, sending in too few troops to do the job right, then not supplying them with enough of the right equipment.

Meanwhile, we find that billions have been wasted in Iraq, that the mercenary troops of Blackwater, payed salaries 10 times that of our enlisted personnel, outnumber the military. We are expected to believe that, over four years since we went into Iraq, we still have not rebuilt their infrastructure, nor  managed to secure a stable government.

So I urge you to watch The War, and then to ask yourself where is our shared sacrifice in the present conflict in Iraq, where are the leaders to secure our hearts and minds, much less those of the Iraqi people. Ask yourself how we differ from those forebears of ours, who did not shirk from the burden they were forced to bear.