Tennessee plays habitat to much wildlife in the form of mammals, amphibians, fish, insects, trees, shrubs and plants. State Natural Areas are dedicated to preserving nature. Can you recognize a Tennessee flying squirrel, nuthatch, snapping turtle, maiden hair fern, sycamore, and a queen snake? Have you ever seen an American toad, great horned owl, alumroot and northern hemlock? 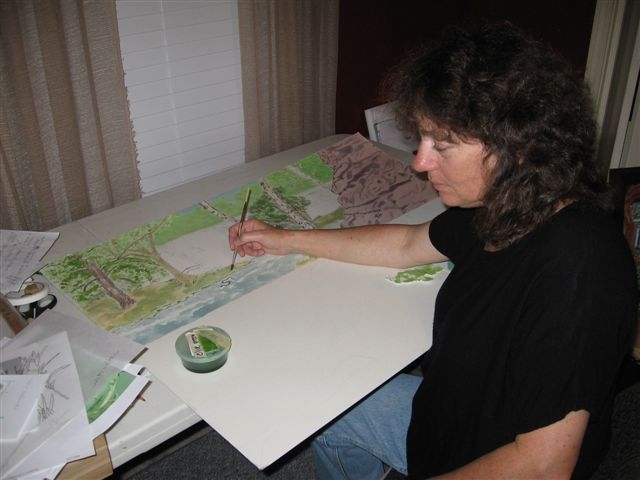 Clarksville artist Debbie Boen has been living a ‘wild life’ with such creatures for the past 21 months as she created and recently completed drawing the pictures for panels to be installed at Burgess Falls State Park in Tennessee. This artistic project required the rendering of three panels representing a woodland, lake and stream bank areas. Altogether, the panels illustrate 15 specific trees, 37 plants and flowers, 41 insects and 65 mammals, birds, fish and amphibians. 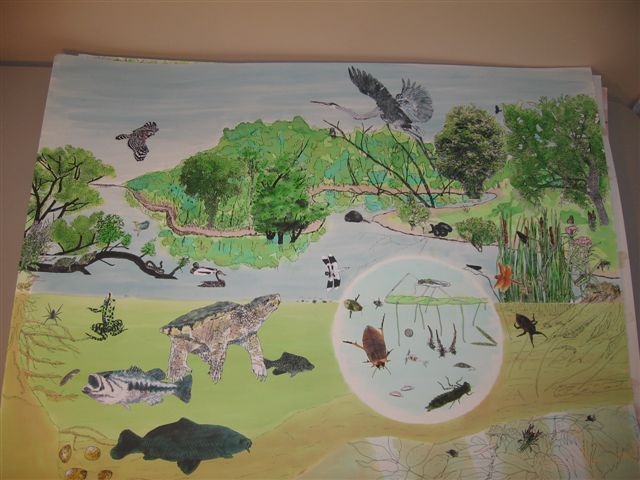 In January, 2006, Dan Webber, Exhibits Program Administrator for Tennessee State Parks, said to the Friends of Dunbar Cave that he needed an artist for this project, his brainchild. Webber met Boen, and a month after meetings with John Froeshauer and Bill Summers, he gave her pencil sketches of the idea and what creatures he needed and left it up to her to make a final design. Asked about it now, he says he would have never thought to do this project the way that she did it. 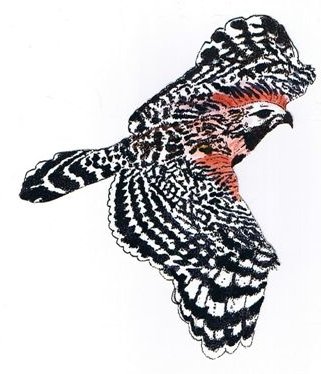 Boen researched each animal, amphibian, bird (Red Shouldered Hawk at left), insect and plant, drew and painted them in large size, and then shrunk and cut them out to go on the panels. She said she did it that way because she could get the exact detail and colors that are true for each creature. Since she is not a naturalist, she would create the flexibility to change the size, shape, location or color at any time before gluing it down.

John Froeschauer, Regional Interpretive Specialist for Tennessee State Parks, evaluated the accuracy of the drawings. He was concerned with things like what season was being depicted and whether the plants and flowers illustrate that. Some flowers, dogwood, for example, bloom early in the season, so the summer dogwood tree does not have flowers. The spotted sandpiper Boen drew had to have spots added to its chest, as sandpipers have spots in the summer.

While John was most concerned about scientific accuracy, Boen was interested in the art of it. She explained

“I wanted each picture to draw you in and each creature to talk to you personally. I want you to walk away with a new interest in and relationship with nature. 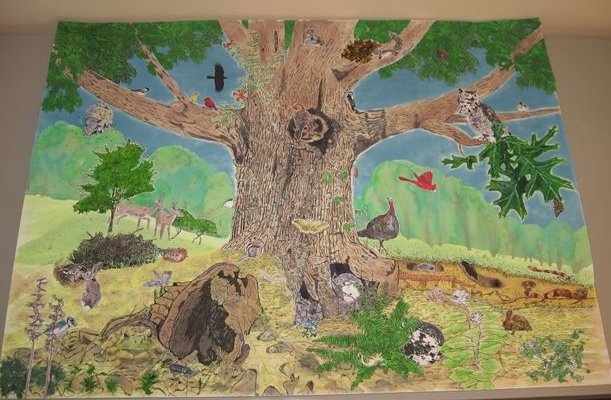 “I have been drawing for a long time. I like to use ink dots for lines and shading. I had never used water colors before and Dan Webber recommended a great brand of water colors. I was really impressed by how all the frogs turned out. Some of the fish and the whirligig beetle turned out well. The female mallard was one of my favorite birds along with the great blue heron. I designed the background after I knew what I had to put on it. The lake scene was going to feature the dam, but most of the creatures were in the swamp, so I switched viewpoints and now the dam is way off on the horizon. But it took me a long time time figure out the design.

“I can’t draw anything out of my head, I have to have a picture, so I ran into problems when I didn’t have a picture. Working long hours to draw so many creatures was fun. Figuring out colors ,and where to place things and arranging them on the picture, was fun. Not knowing what logs look like under water was torture. The accuracy for me was too important to make up something. I found out that fishing books have the best underwater pictures”. 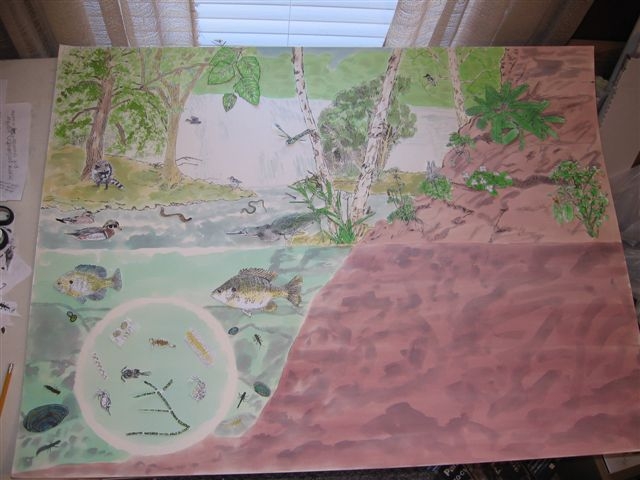 Boen took photos of Burgess and included what she could on the panels. An oak that lives at Burgess has a place in the oak tree drawing. A hemlock from the Burgess trail is featured. There’s a rock that has specific markings that she included. The lake and falls are formulated from pictures of the site. When she needed them, she wrote to Bill Summers, Ranger at Burgess, and he sent pictures.

“It was a secret dream of mine, to draw panels for a park. Our family has been to so many parks over the years and when I’ve looked at panels I’ve thought, “Wouldn’t it be cool to make that?” So when Dan asked for an artist I felt like the dream was becoming a possibility.” 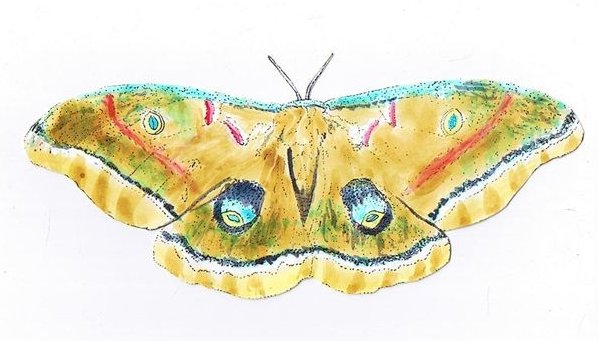 Dan and John decided not to label each creature separately but to list what is there and ask the public to interactively see if they can locate them. Boen finished the lake and river side panels in October 2007.

Dan Webber (left) is now working on the descriptions to finish them. They are expected to be on display at Burgess Falls in spring, 2008.Burgess Falls is located off exit 280 on Interstate 40, east of Nashville. Along its walking trail are three waterfalls and a lake. The panels will adorn these areas. Boen’s visits to Burgess made her fall in love with it.

“Climbing down the rocks at the third falls and feeling the mist in my face was really wonderful. It’s not a big park but it’s excellent.”

After this more than a year and a half project, Boen says that she is now free to do things like work on her neglected yard, create other art, clean her house, watch movies, rabble rouse (Debbie is founder of FreeThinkers for Peace and Civil Liberties), see more live theatre, and not feel guilty about having an unfinished project hanging over her head.

“It took a long time, much longer than any of us would have preferred, but I think that something this important merits it.”

Boen’s process included a preliminary plotting of both the landscape and it’s inhabitants. These next few photos reveals just a few steps in the development of the panels: 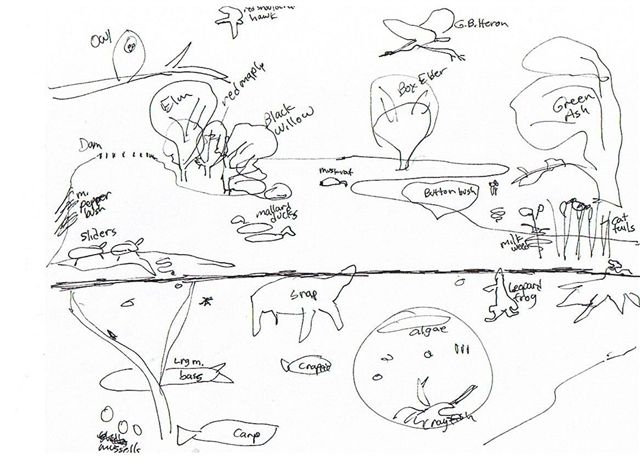 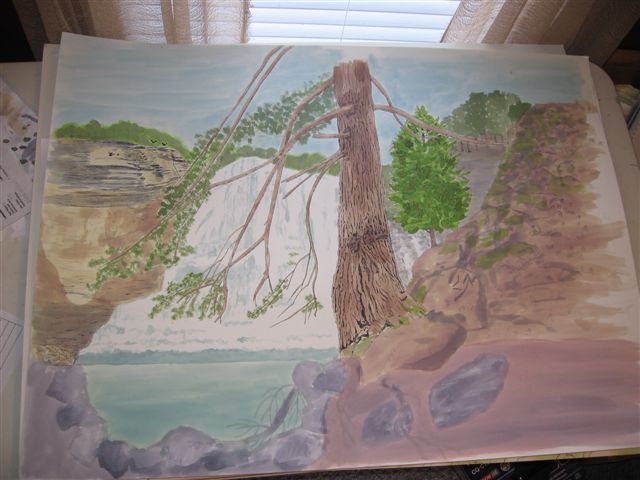 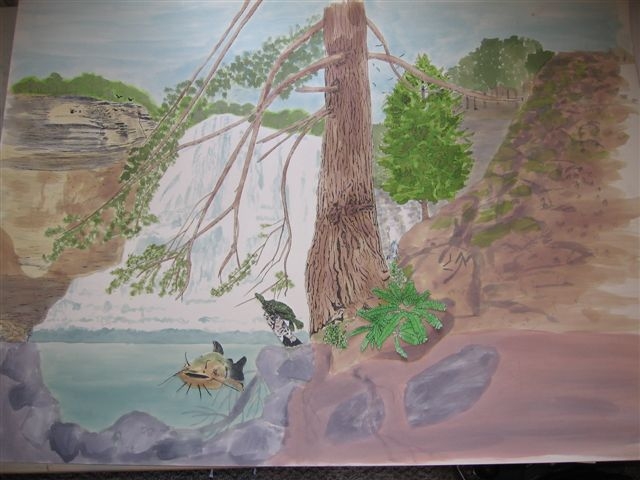 The first creatures added to this panel