Fuel the flame; honor our soldiers 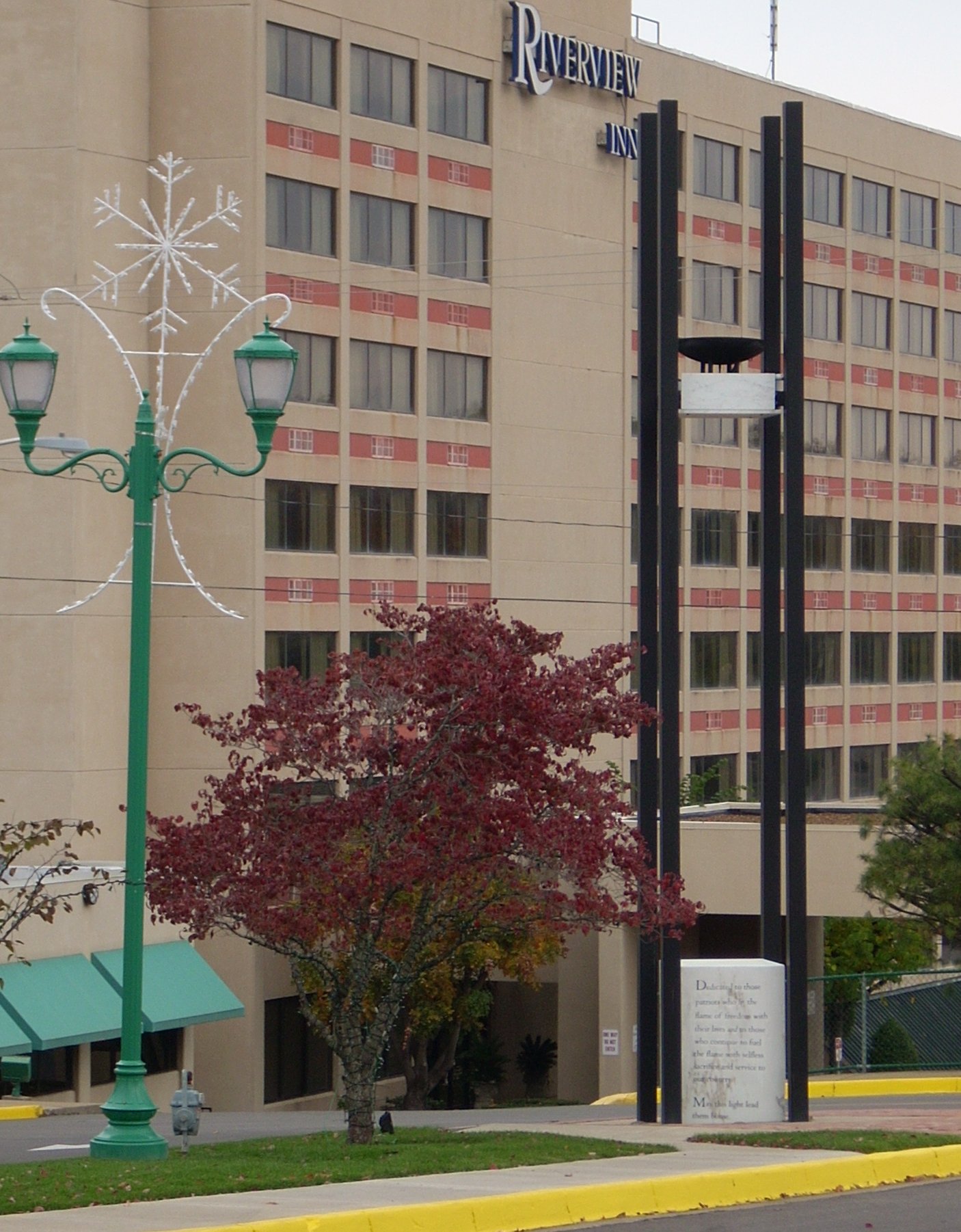 World war I officially ended on June 28, 1919, with the signing of the Treaty of Versailles. The actual fighting between the Allies and Germany, however, had ended seven months earlier with the Armistice, which went into effect on the eleventh hour of the eleventh day of the eleventh month in 1918. Armistice Day, as November 11 became known, officially became a holiday in the United States in 1926, and a national holiday 12 years later. On June 1, 1954, the name was changed to Veterans Day to honor all U.S. veterans.

Saturday, November 10, was a day of parades, ceremonies, and memorials, flags, uniforms and speeches honoring the veterans of American wars, including the current conflict in Iraq. Sunday, November 11, was the actual holiday, the Holy Day of Days for veterans across the country. So what happened in Clarksville on this Veteran’s Day?

The light went out. An unheralded extinguishing of eternal flame in downtown Clarksville, a flame that is supposed to be a blaze of fire in the night sky over the city. This darkening should be considered an insult to every person serving in the military today, and to every citizen of this country. The darkening of the flame (which has happened before with no fanfare) is also a slap in the face to the vets of Vietnam, Korea, both world wars, and every other war in our history. The fact that it happened on Veteran’s Day and as Christmas lights are being illuminated citywide just magnifies the force of that slap.

Clarksville brags about being home to Fort Campbell and the 101st Airborne, with its a huge population of soldiers and their families, many of whom have endured multiple deployments, some of whom have paid the ultimate price, many others who returned wounded, fractured in body, mind and family. They may be silenced on issues relating to the war in Iraq, but if I were a soldier or a military spouse I’d be screaming. Especially when the number of US soldiers killed is moving to 4000 in Iraq alone.

I am an anti-war activist and an avowed peace monger, and I want to scream about this flame out. I was upset the first time I saw it out several years ago, before I was immersed in the community. I was upset the second time it was out (and that was long period of time). On Sunday, all I could say was “here we go again.”

I e-mailed Mayor Piper, all 12 City Council members, Veterans services for the county and the Gas and Water department to ask a simple question: Why?

I received three replies (as of 11 a.m Tuesday): one from Ms. Hickey at Gas and Water referring me to the Economic Development Council who passed the buck back to the Mayor’s Office; and notes from three City Councilors.

“I do not know the answer to your question, however, I will find out tomorrow and rectify the problem for now and hopefully for the future. Thank you for bringing the problem to my attention. I must admit that the public should not have to bring problems such as this to our attention.”

“I have to agree with you. Of all occasions, the flame should be burning on Veteran’s Day Weekend. I will call the Mayor’s Office tomorrow to see what the problem is. Thanks for contacting me…”

“I will certainly get with the people responsible for keeping the flame going. I am sure no one put the flame out on purpose. “

I support the troops by working to raise public consciousness about the war and am active in political action to bring them home. I work on issues of political and social policy. I’ve taken care of soldiers suffering through the aftermath of wars long since ended, and for 27 years was legal guardian to a WWII POW irrevocably damaged by that incarceration. Like tens of thousands of others, I lost friends — many friends — to Vietnam, and older family members to the ravages of World War II. I’ve been to the cemetery to clip the grass around the bronze plaque at my soldier/uncle’s grave (a WWII prisoner of war). I’ve touched names on the wall in Washington many times.

I am not ashamed of my opposition to the current war, and I would do anything to help a soldier or their families; I respect them. But quite frankly, every time I have seen this memorial unlit, the sky blackened where a beacon of light should shine, I am ashamed of the city I live in now.

When a beautiful, inspirational monument such as Gregg Schlanger’s 30-foot high Pillar of Fire, Pillar of Clouds is commissioned and constructed as a symbol of peace, and intended to honor all soldiers from all services and all wars, one would think the city, its leaders and the businesses that profit from the paychecks of thousands soldiers every day, every week, all year long, year after year, would be standing in line to make sure this tribute is bright and visible every hour of every day. They should be standing in line to underwrite this beautiful memorial, which stands tall over the Cumberland River for all to see, and ensure with due vigilance that the flame never dies.

I was informed that in the case of the last longer term “extinguishing” of the flame, the gas that fuels the flame was too expensive to run, ergo the flame was extinguished. And it was out for a long time. It re-appeared sporadically for festivals such as Rivers and Spires and for singular events such as Memorial Day, though this summer and until Sunday, the flame remained lit. Thankfully lit.

This random pattern of snuffing out the flame is an insult to those it was intended to honor. Or has the definition of the word “eternal” been rewritten?

Driving across Public Square Sunday, a friend called me just after dark and said, simply, “it’s out.” I blinked. And hastily penned an e-mail to Mayor Piper. Followed 12 hours later by a flurry of letters to other city officials.

Is it a malfunction? If gas expense is the issue, why not, at the very least, consider rewiring it for electricity? Or better yet, hook it up for solar power. Surely modern technology has a discreet method can relight this city’s flame without obvious incursions to its artistic design.

If expense is the issue, why not ask the car dealerships that sell all those nice new high speed cars, pick-up trucks and SUVs to Fort Campbell soldiers to donate the price of a new car to the cost of the flame’s gas bill? Maybe the dozens of check-cashing operations and businesses who deal in title loans and the pawn shops that do a steady trade along Fort Campbell Boulevard can take turns or pool resources to underwrite the gas bill?

Why not ask McDonald’s and WalMart — where military families spends millions each year — to support the flame? Maybe the real estate agents selling all these new homes to soldiers in this Gateway to the South city can pool a percentage of profits into a realtor’s “flame fund?” Why don’t the churches get together and make a donation to underwrite the honor established by the flame — how many of their members come from military families? Maybe the city can fuel the flame by following the example of the IRS and adding a “donate one dollar to the flame” check box on the tax bills issued to homeowners and businesses.

Lawmakers and businesses and churches and families advertise on their promotional signs that they “support the troops.” Supporting the troops is more than a sign: prove it by putting your money where your mouth is. Apply the cost of the sign you made or bought to the expense of keeping the flame alive in their honor. Scream when the light goes out.

It is the height of irony that the only light on the Pillar might be candles placed by anti-war activists to honor a fallen soldiers.

If the City of Clarksville can’t keep the supposedly “eternal” flame lit, a flame which is advertised as a landmark on the city’s websites, maybe it should donate the memorial to some other city — I’m sure there are many communities across the country who would love to have this inspirational and commemorative work of art lighting up the night sky in their community. 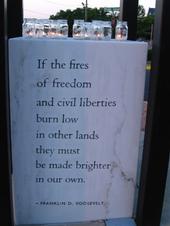 To have it stand at the top of a hill as one of our city’s landmarks, yet be unlit at a time when our city’s soldiers are deployed and wounded, or dying, and on the day devoted to their honor, is a bullet to the heart of to every soldier who lives here and everyone serving away from home as well. How can the city glad-hand the military while turning off the light? Aren’t they embarrassed? If not, they should be. Embarrassed and ashamed.

I frequently stand at the memorial with friends in peace actions acknowledging of our escalating losses and the high human price we are paying in Iraq and Afghanistan. It is sad that a small and humble group of pacifists in an overwhelmingly military town stand at the base of the eternal flame for a memorial, reading the names of the military dead, must light their own candles of honor against the night.

Editor’s Note: We will of course continue to follow the flame in search of an explanation.

Debbie Boen photo: Marble base of the Eternal Flame is illuminated with candles during a peace prayer vigil the last time the flame was allowed to die.