HomeOpinionDevelopment on steroids: Rethinking urban planning for a city on the grow
Opinion

Development on steroids: Rethinking urban planning for a city on the grow

It is with a walloping dose of dismay, a meager bit of optimism and sometimes amusement that I follow stories of the city’s intent to address planning and development issues, including signage, as Clarksville braces for the transition of Gateway Medical Center from Madison Street to the St. Bethlehem area, and push forward development issues that affect the entire city. But let’s start with signage. 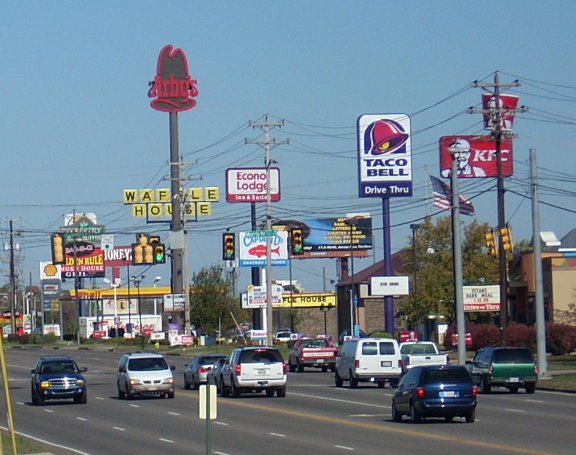 Signage. No kidding. Someone wants to talk about signs? It’s about time, though it is only a starting point. When the city refers to “blighted” areas, it refers to areas not meeting a maximized tax potential. Your property is worth much less in tax revenue as your home, and so much more (to the city and developers) as a revenue-generating business-zoned cadre of condo’s, apartments, another mini strip mall or as part of the growing Austin Peay State University campus.

In recent months we’ve heard talk of redevelopment, urban blight, and all manner of things relating to zoning and design. The fact is, when I consider what constitutes blight in Clarksville, it’s not just Emerald Hill or Red River or Brandon Hills or any of a half-dozens areas that may or may not be blighted in the usual sense of the word but which trigger dollar signs in the eyes of developers. To see blight, all I have to do is drive down Fort Campbell Boulevard or Wilma Rudolph Boulevard and look out the car window. Blight. One big wall of urban blight in the guise of revenue-producing business districts. The heck with aesthetics.

Face the fact: the view is UGLY.

Wilma Rudolph Boulevard, especially on its northern half, is a repulsive, just plain awful stretch of roadway, the poster child of development on steroids. Signs of every shape, size, height, and digitalized blinking technology (and I mean “blinking” as in “obnoxious digital flashing signs”). It’s a major distraction to drivers, a garish display more suited to early Las Vegas of the rat pack era. Tacky.

Before tackling the end plan and permitting that will shape and the future of the Madison Street/Hilldale area, take a drive (as a passenger) down Wilma Rudolph — either direction will do — and look ahead, a long way ahead. Up, down, over and beyond the car in front of you. You’ll see a landscape of utility poles scattered like pick-up-sticks, a tangle of wires and electrical towers, a no-rhyme-or- reason display of signage. Few if any berms (they are most noted on the southern stretch of Wilma Rudolph). Minimal greenspace. Absence of anything but token saplings. Acres of dealer lots and parking lots reflecting summer heat and glare, which when combined with an onslaught of traffic, exhaust and pavement are major factors that help push the seasonal heat index to unmanageable and even dangerous levels and create the stench of air pollution via auto-exhaust.

It doesn’t tempt me (nor my visiting friends) to try and stop or shop; it motivates me to “hit and run” those stores I absolutely need something from at the times least likely to create stress, then simply “get the heck out of Dodge” and go someplace cleaner, neater, less cluttered, more attractive, less tension-producing, and infinitely more user friendly. Someplace much less offensive to the eyes and ears. Someplace more conducive to peaceful shopping. Peak shopping periods of Black Friday and back-to-school tax-free weekends are the best reasons in the world to avoid both thruways and all stores. [Think of your absence from the melee as a mental health day.] Who needs the insanity of jockeying through the traffic and acres of parking lots in unattractive surroundings with all the excess vehicular traffic, noise and stress? Yet these highways have every day cycles that live like a Black Friday.

To relentlessly permit additional residential development in surrounding areas before adequate infrastructure — everything from fire and emergency service access, water and sewage issues, traffic flow, road improvements, community services and school space is implemented — is the height of folly. It is irresponsible. When studies indicate that planned road improvements to be completed 20 years down the road still won’t be enough to handle traffic, it’s time to step back, hit the brakes hard, and rethink the community as a whole.

Scan these thruways from side to side and you’ll find acres of box stores and strip malls that could benefit immensely by access or connector roads linking these plazas to each other without making the already horrific flow of traffic zig-zagging Pac-Man fashion to the main road, finessing the right- and left-turns to each individual store, mall or restaurant. But oh, wait, a few parking spaces might fall victim to such an “access” plan.

There are a few businesses like CDE, a few churches, St. Bethlehem School and a few medical offices that are low key and well groomed [read “attractive”, “welcoming”], but on the whole it’s a case of “they paved paradise and put up a parking lot.” [Big Yellow Taxi/Joni Mitchell, 1970]

They took all the trees, and put em in a tree museum
And they charged the people a dollar and a half to see them
No, no, no, don’t it always seem to go
That you don’t know what you’ve got till it’s gone
They paved paradise, and put up a parking lot

The mess has been created, allowed to stagnate, and will not be easily modified. All the city can do at this point is target the newest areas of development (Hilldale, Madison Street, Riverside Drive, Emerald Hill, Red River, and start anew with the kind of carefully considered and thoughtfully implemented development that creates community without destroyed the history, heritage, culture and neighborhoods that are the very heart of a living, breathing city.

In so doing, planners need to keep in mind that community includes history, a mix of income levels, a mix of ethnicity, and myriad factors that breath life and create a hometown as well as a business district. Tearing down rather than refurbishing or historically recreating homes destroys identity, history and the good will of people. Not everything old needs to be replaced with something new. At the turn of the 20th century, cities were lined with brick blocks, four and five story walk-ups that after a hundred years decline. The cookie-cutter clusters of condos and apartments being built today are no different from a theoretical posit (though the old buildings were often better constructed). The well-built brownstones that have been revived in some cities are the most desirable of urban housing units, just as many of Clarksville’s small houses and cottages could be with the right revitalization plans.

A lot of people travel by bus, including the elderly and disabled. Some of the city’s bus stops are ridiculously difficult to use. It is unconscionable that a place like Governor’s Square Mall welcomes anyone with money to spend but after it’s spent, shoppers traveling by bus stand by the curb (no shelter, no bench) to wait for the half-hour service. If it’s raining and one must wait inside, that bus can come and go before shoppers get out the door and make the sprint down the sidewalk. It doesn’t matter if bus stop facilities are the responsibility of the Transit Authority or not, the money-making mall should be paying attention to something that definitely affects one segment of its shopping base.

One of the nicest stretches of Fort Campbell Boulevard is the length on either side of Patriot’s Park. But head south and you hit a cacophony of pawn shops, a plethora of title and payday loan companies, more outrageous, garish and inconsistent signage, more power lines, parking lots and empty overgrown lots (some people consider that token greenspace). There’s a hideous and distracting neon orange shop (fireworks) that is far more annoying than amusing, resplendent in a hue that would be banned in most progressive forward-thinking communities.

In the eye of the beholder…

Clarksville keeps talking about its image, its position as a business “hotspot,” its role as a potential “destination.” It’s all well and good to cultivate big business and major employers, but those employers draw in and serve people, and people — the worker bees as well as the management bees — are the soul of the community.

Progressive cities that fuel the contentment level of their citizenry have things like walkways, bikeways, bike lanes on major streets, greenspace, meandering sidewalks, mini-parks, park becnhes, berms, crosswalks, comprehensive sheltered bus stops, expanded bus service including nights and Sundays, express point-to-point bus service, and “Park & Rides” for local commuters. As planners look to the post-Gateway development of the Madison Street area and that section of town residents want to retain as “Hilldale,” and as planners look to other development projects downtown and across the city, they would be wise to look at what environmentally conscious, earth-centered, people and culture friendly developers in other cities and states are doing and draw from the best of it.

In the books Home from Nowhere and The Geography of Nowhere by James Howard Kunstler, the author examines the rise and fall of the American landscape — not the amber waves of grain and purple mountain majesty landscape but manmade landscapes. Kunstler addresses the form and function of everything from building codes and zoning to transit systems and roadways, correlating their design to the functioning of community. He tabulates the economic, social and spiritual costs paid on the altar of thoughtless design and places high rank on the value of sound design that integrates civic art and civic life with urban planning.

In 1993, John P. Kretzmann and John L. McKnight published Building Communities from the Inside Out, a workbook-style primer for planners that offers step-by-step strategies for recreating community based on an assessment of its assets (including human, cultural, ecological and economic). It’s based on the concept of finding local resources (individuals, small and large businesses, local philanthropists, civic leaders, cultural resources) and using them as the catalyst for development from the inside out. Maybe this text is too simplistic or non-mercenary for the current state of development in Clarksville, but it’s ideas have solid basis in fact and study, and should be used as well by organizations and individuals seeking to address specific issues.