HomeArts/LeisureIn the Name of God: Immersion in Eastern culture, Islam and suicide...
Arts/LeisureOpinion

In the Name of God: Immersion in Eastern culture, Islam and suicide bombings 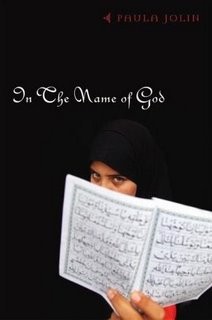 In the Name of God came across my desk by request from the author, Paula Jolin, who asked me to take a look at it. I did, in part because the setting and the emotion behind the story is something I wanted to know more about; fiction mirrors life, and I hoped this story would provide that for a difficult subject: suicide bombers.

In the Name of God delves into an Eastern world and a culture relatively alien to me, yet it is a culture with probing fingers touching and testing and tasting the culture of a freedom that is uniquely Western.

In this book, 17-year-old Nadia lives in Damascus, Syria, locked into a straight and narrow path of traditional Islam. She has enough exposure to Western ideas to tempt her and rouse her curiosity, and is also bitterly aware of the politics, economy and culture that envelops her own country and neighboring Iraq.

Nadia is religious, holding deep and living true to the opening phrase that graces every chapter of the Qur’an: In the Name of God. But this is not a story told with a western insight or desire; it is a story about a struggle to be the best and most faithful within one’s own religious beliefs, a personal journey toward what becomes, in Western eyes, a potentially tragic destiny. For Nadia is religious, and that the depth of her spiritual commitment in tangled with her curiosity and political ideology. For Nadia is a teenager, with all the turbulence of emotion that accompanies those volatile, questioning years.

Nadia is intrigued by the “resistance,” by the underground of political thought, rebellions, ideology and spiritual consequence.

Jolin weaves this story with an abundance of dialogue and a complex mix of characters that move through a world unfamiliar to Westerners: the odd mix of the donning of traditional burkas and a desire to wear high heels, of living life with the constant of religion as its driving force, of existing under the scrutiny of a dominating political eye.
As Nadia tests the waters and pushes her boundaries, pieces of family life unfold with a solemn horror.

In one such discussion, Samira, her sister, says:

“The Qur’an needs to be re-interpreted by modern scholars, men and women. And for the record, nothing in it says women have to cover their heads…
“It’s the best way to say ‘fuck you’ to a government that could be killing my brothers as we speak.”

The government hates the scarf on a woman’s head, proof that allegiance to God is more important than allegiance tot he ruling party. A vivid reminder, however silent, that Islamic resentment throbs in every corner of the city.”

It’s a belief that rests on a precipice of old ways and new thought, of tradition at war with change. Nadia has a hand in each in a game of tug of war, and war is slowly winning with incremental shards of shrapnel.

The strongest image and insight in this novel, though, is the highly personal conversation between Nadia and her mother about marriage, her mother’s arranged marriage at the age of 12.

“…my parents … didn’t even sleep in the same room. My mother said nothing to me the night before.
“He was older than me, of course, much older, but he was religious, and he had no experience either. I remember looking at him, standing there, in the light of a candle, and listening to explain he was going to stick…stick it in my most private place. I was so scared. That big thing in this tiny space? He’s going to break me in two, I thought, he’s going to break me in two.
“…well, after you can imagine things were very different…”

Nadia is stunned by the stark and unusual revelation, by her mother’s verbal validation of the control men in her society hold. She retreats to her room, lost in thought.
The urge to rebel surges, and manifests it in response to a strange note she holds that reads “meet me at midnight.” It is the first step toward terror.

Much of Jolin’s novel is written in simple language, it drops these little bombs of conversation that offer insight and understanding even as they raise more questions about this culture. Why have women ceded so much control to men? What makes that belief in this religious-based society so strong?

The text is rooted in conversations (dialogue) and the ramblings in Nadia’s mind, the twists and turns of her thoughts as the modern world, the world outside Syria, reaches in slowly, with elongated fingers, to tempt one to further dissatisfaction. Nadia’s balancing act, her wavering between rebellion and training is in many ways “typical teenager” behavior, a time to challenge, explore and determine an individual path. Hard to do, especially in a country rooted in religious and paternal control.

The only visible rebellions are grounded in home-grown terrorism and that becomes attractive to Nadia.

At 208 pages, In the Name of God is a fairly quick read and the story itself moves quickly, perhaps too quickly. Told in the first person, Jolin (at left) moves forward through the extensive use of all-revealing dialogue, but it tells us too quickly and simplistically: we are left wanting more, wanting a deeper probe beneath the surface. It was almost too busy on the surface. We as readers don’t quite understand the depth of Nadia’s passion, hate or love. We have an idea, but it is not enough.

Too, I prefer more description in the stories I read and do not like to have that come solely through dialogue. I wanted to feel the heat of the dessert sun, the starkness of the cityscape, the vibrancy of the market places, the pulse of fear as this young girl navigates the fringes of a subculture, the warning goosebumps that accompany the dark unknown. I wanted to feel it leap from the page and envelop me, and that didn’t quite happen here.
My own style of storytelling has been called lyrical and poetic, and I prefer that in my own choices of reading. Stark, raw edges and simplistic movement of plot lose me along the way.

I read the entire book, drawn to the story and seeking a bit more understanding of a culture that is alien to me. Given the author’s research and background (she has lived in the Middle East for a decade and has a master’s degree in Islamic Studies), I knew I would get a hefty dose of Islamic culture in this book. I did. I still found myself wanting more.