HomeOpinionFix our roads before resorting to traffic enforcement cameras
Opinion

Fix our roads before resorting to traffic enforcement cameras

Clarksville wants to install red-light cameras at up to 4 Clarksville intersections in what is basically a dangerous revenue generating scheme. These cameras result in more accidents not less. The damage rear end accidents cause costs more to repair. There is also an increased likelihood of injuries and even death to those who are involved in the rear-end accidents. Let’s not even talk about the fact that insurance rates will likely end up going through the roof even if you never get one of these tickets.

I hereby challenge our city to fix our broken intersections, and not to profit off a problem the city has created intentionally or otherwise! 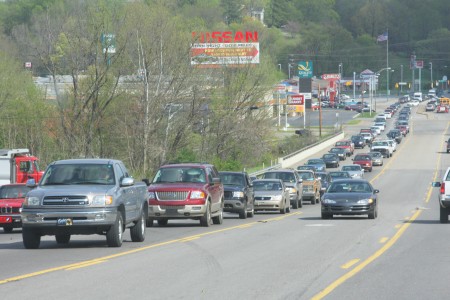 The city insists their goal is road safety and not revenue, so I am sure they would not mind putitng their money where their mouth is.

I propose that if they approve red-light cameras in Clarksville any money generated by fines should by ordinance be placed in a lock box account and the use of those funds be restricted to enacting safety enhancing engineering and other improvements to the very same intersections where the cameras would be located. The city should also not approve any contract which gives a per violation fee to the ‘for profit’ camera vendors.

The city should also commit to take steps to re-time the red-lights throughout Clarkville to enhance the flow of traffic. I drove from one end of Clarksville to the other the other day, and during that drive I was stopped by red-lights at every single signaled intersection I passed through. I was driving exactly on the posted speed limit. The way the lights are timed encourages aggressive drivers to drive more aggressively and to increase their speed to beat the lights.

Our lights are likely timed this way intentionally as a “traffic calming measure,” or as an electronic speed bump, but it’s not working. One would expect red lights to be timed to stop people who are driving at any other speed than designated speed of the road, this would provide encouragement to speed up excessively slow drivers, while slowing down fast ones.

Our city’s public safety committee expressed interesting views on this matter with the chairwoman saying “We don’t care if the public supports or opposes this,” during a public meeting that I attended. At the same meeting they were actively discussing ways of limiting the ability for the public to give our elected officials input on this matter. I think this kind of arrogance sums up our city’s view on a lot of things that they do.

This is something we must work to change in the next couple of elections by giving pink slips to those who seek to force their will on the city of Clarksville regardless of the will of the electorate.

City council members I hope you are listening, because we the people are wide awake, watching what you are doing. We are not happy, and we WILL NOT forget!

Bill Larson
Bill Larson is  is politically and socially active in the community. Bill is a member of the Friends of Dunbar Cave. You can reach him via telephone at 931-249-0043 or via the email address below.
RELATED ARTICLES
Opinion