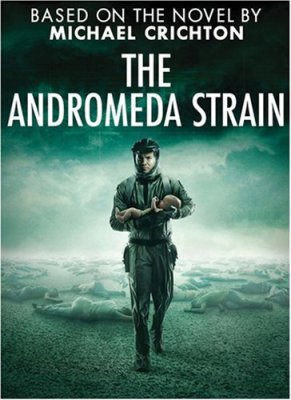 I’m not usually a fan of remakes, especially for a film I loved in its original form. The 2008 A&E production of Michael Crichton’s The Adromeda Strain overcame the odds to be at least as good as the original, if not better. It’s all a matter of perspective.

In this upgraded version, Director Mikael Salamon stuck to the story (Wow, what a concept!) and used 40 years of improved and expanded technology to rev up the action and adapt the film to 21st century science. It’s a place where the fiction is less improbable, the fantasy more believable, and, in the age of conspiracy theorists, corruption, terrorist threats and a new thrust toward space exploration are easily interjected into the film. 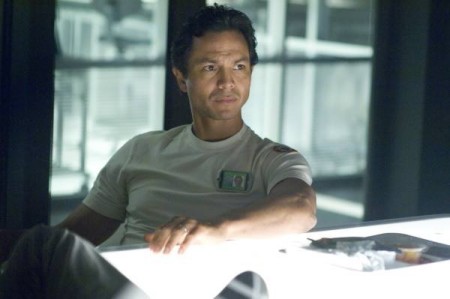 This time around, Benjamin Bratt (above) of Law & Order fame is Team Leader Jeremy Stone, with a supporting cast that includes Ricky Schroeder of NYPD Blue, Eric McCormack of Will and Grace, Daniel Day Kim of Lost, and Christa Miller of Scrubs. 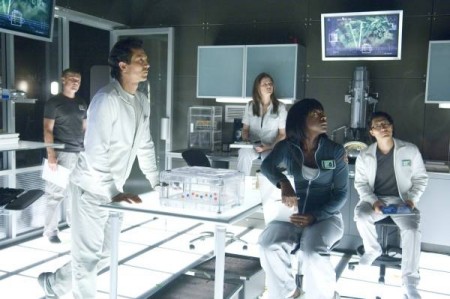 In a nutshell, Project Scoop, launched to collect space debris and signs of life beyond earth, comes crashing down in a Utah town, where two teenagers find it and bring it home. Curious civil servants open what they think is a satellite and unwittingly release a highly-adaptable killer virus with a near instantaneous kill rate of 100%. Our scientists are “scooped” up and routed to assignments in a super-secret government lab five stories underground. In this medical mystery thriller, Stone’s Wildfire team (above) must establish what the virus is and how to contain the ever-morphing bug before it kills every human on earth. Should disaster strike within the Wildfire lab, the structure will self-destruct in a nuclear cataclysm.

I was fascinated by the integration of new technology in an old story; tracking the virus via 21st century technology is a logical upgrade in a film like this. Unlike many sci-fi thrillers who overdose on special effects, what we see here is comparatively believable: the retinal scanning, the thermal imaging, the military weaponry — it works because it is reality based. The world has faced biological terror and responded to the potential threat of pandemic illness. We have terrible weapons to deploy, but they may not work, and they may not be the best choices in the battle for survival.

Presented as a mini-series, The Andromeda Strain has a bit more time to develop both character and plot, and does so without dallying too long in insipid subplots. The on-screen time is devoted to moving the plot forward, keeping the tension tight, and throwing in a few twists and turns along the way.

It is a rare occasion when a film sticks to the original story; too many film adaptations of good books bear no resemblance to the original. In this case, the book, it’s first incarnation on film, and this new rendition, pass the test, and we, the viewers, reap the reward. 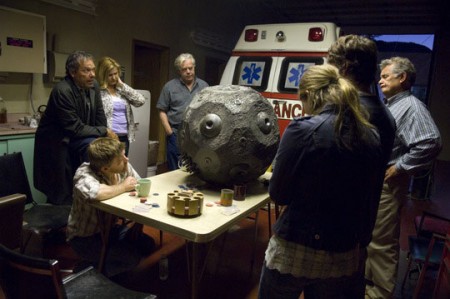 The unsuspecting townspeople are about to unleash Andromeda 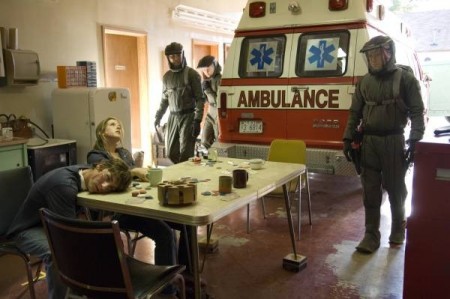 The Wildfire Team confronts an entire community eradicated by Andromeda