On Thursday morning the 4th annual Clarksville’s Writers Conference began. The first event was a bus tour of historic locations throughout our city. Included in this years tour was Riverview Cemetery, Trinity Episcopal Church, The United Methodist Church, The Immaculate Conception Catholic Church, and the historic Tip Top mansion owned by Elwyn and Rubye Patch.

The tour was organized by Dr Minoa Uffelman, a history professor at Austin Peay State University; and guided by Taylor Emery and Dr. Ellen Kanervo, who both did an excellent job keeping the group on plot and on schedule. As the tour progressed they read aloud excerpts from the diary of Nannie Haskins Smith about her life in Clarksville during the Civil War era.

Monday Morning February 16th `63
Again I have commenced a journal. I used to keep one but two years ago when the war broke out, I ceased to write in it just when I ought to have continued. Yes! Our country was then perfectly distracted; To arms! To arms! was echoed from every side; volunteer companies were being gotten up all over the country to fly to her rescue; and of course Clarksville did her part….

Haskins goes on in this to describe the mustering of two Clarksville regiments, the fall of Fort Donelson, Clarksville’s occupation, it’s brief reprieve from Woodward’s raid, and Col. S. D. Bruce’s recapture of the city. 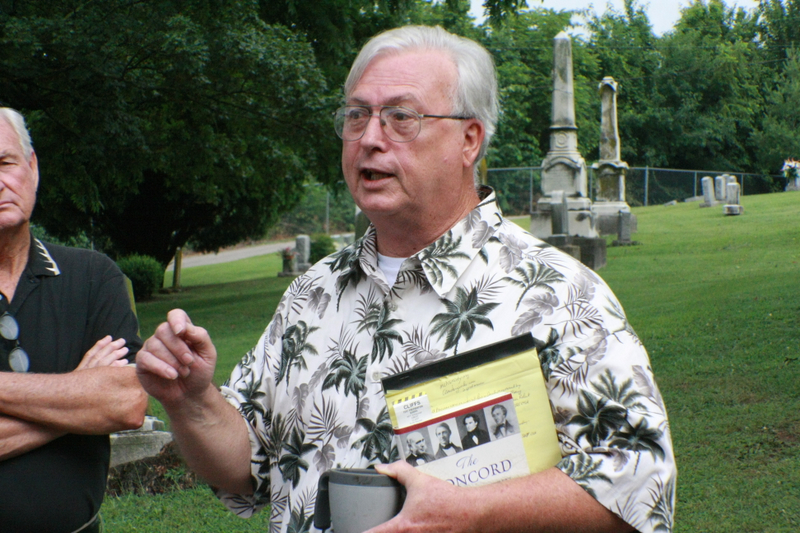 At Riverview Cemetery Dr. Richard Gildrie spoke about the history of Clarksville during the Civil War and the period directly following it. He also took the tour group to view the Confederate memorial located at the cemetery.

The Memorial remembers 164 confederate dead, and two African American nurses (Mary and Susan Bibb) who died from disease contracted from soldiers in their care, and honors Miss Blanche Lewis at the Clarksville Female Academy for her dedicated care of the soldiers before they died. 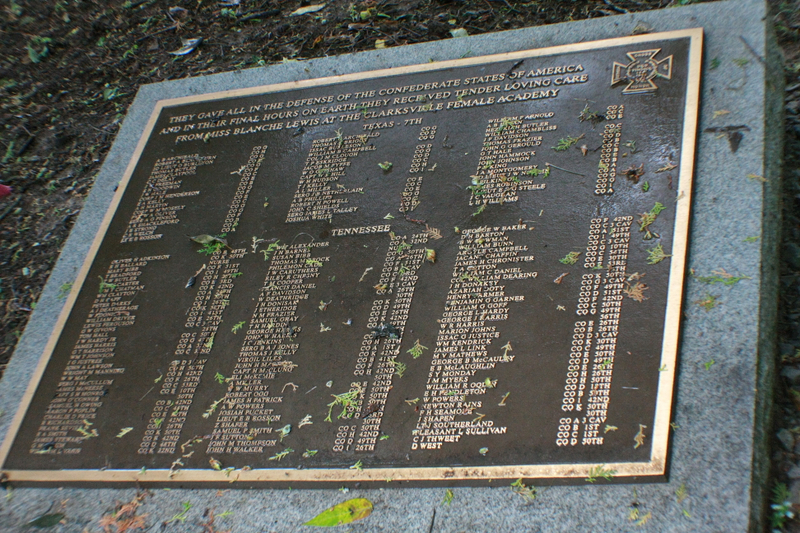 More than 305 Confederate soldiers who died in Confederate hospital in Clarksville, Montgomery County, Tennessee, were buried in the garden behind the Clarksville Female Academy. Two African-American women, sisters, who contracted a disease and died while caring for the ill and wounded the soldiers at hospital are also buried there.

The initial graves were marked with wooden headboard but in time these deteriorated and specific knowledge of burial locations was lost. In 1897, a landslide exposed some of the soldiers’ remains. One hundred and twenty seven [127] unidentified remains were found, disinterred, and re-interred in the Clarksville City Cemetery [present-day Clarksville Riverview Cemetery]. The remains of the other 180+ Confederate soldiers were not disturbed 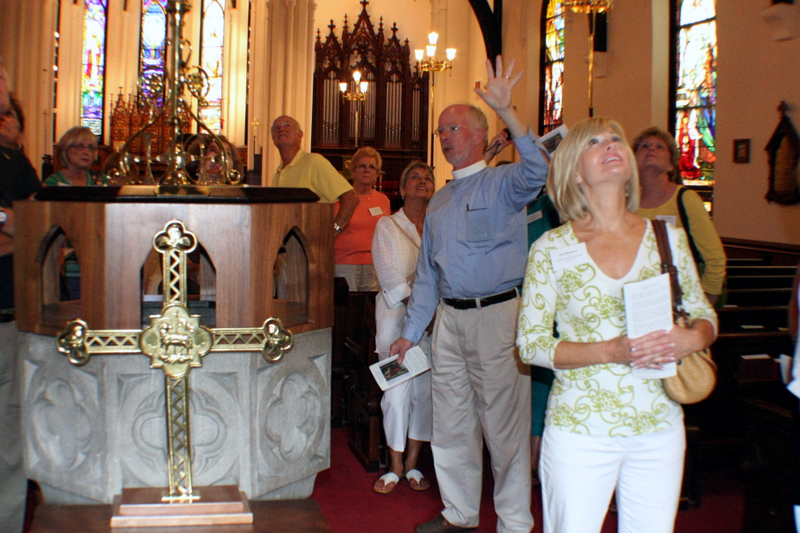 After the tour left the cemetery, it proceeded to Trinity Episcopal Church where the Rector of the church Reverend R.H. “Mickey” Richaud gave a detailed accounting of it’s history, from its founding in 1875, to the damage it received in the 1999 Tornado, and it’s subsequent reconstruction.

The highlight of this historic church is 18 incredibly rich and detailed stained glass windows including the Bishops’ window which was installed in 2007. As the brochure for a self guided walking tour states “Trinity Church is an embodiment in stone and wood of an ancient faith and a still developing tradition. You are welcome here.” I suggest you take them up on their offer. 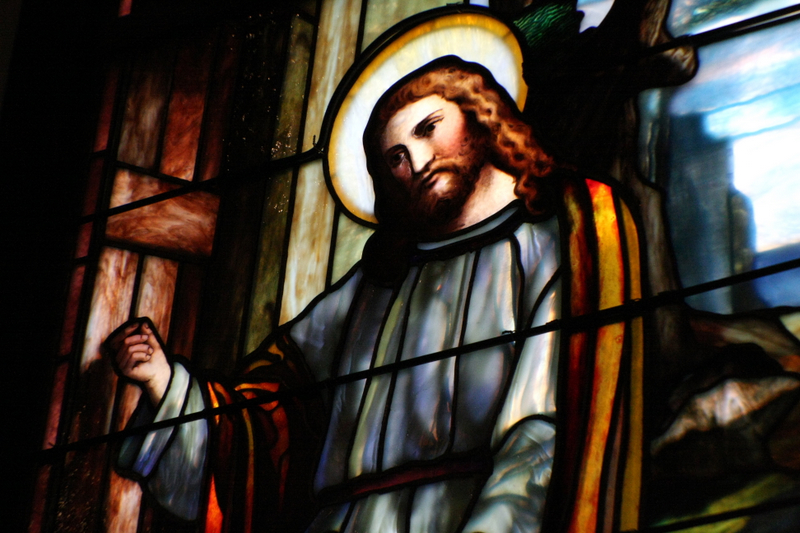 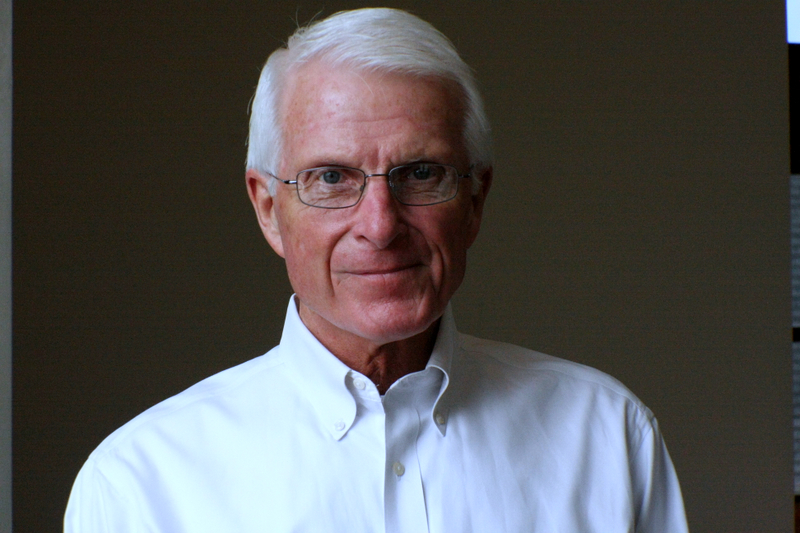 After leaving the Episcopal Church we traveled a few blocks to the Madison Street United Methodist Church where we were welcomed by Phil Whittinghill the Business Administrator. The church features ethereal bell towers erected in memory of the 1999 tornado during which it was almost completely destroyed.

At approximately 3:45am on Friday, January 22, 1999, a massive tornado hit Clarksville and Madison Street United Methodist Church. The Sanctuary was completely destroyed and the educational wing and chapel sustained considerable damage. It goes without saying that members of the congregation were devastated by the destruction of the church. On June 8, 1999, the administrative board of the church accepted a bid from the architectural firm of Everton-Oglesby-Askew of Nashville to design a new building. On September 19, the architects displayed their preliminary drawings of the church as it now stands. The reconstructed church includes a six-hundred person sanctuary, fellowship hall and kitchen, educational and administrative offices, Christian Life Center and gymnasium, and space for community/outreach services. 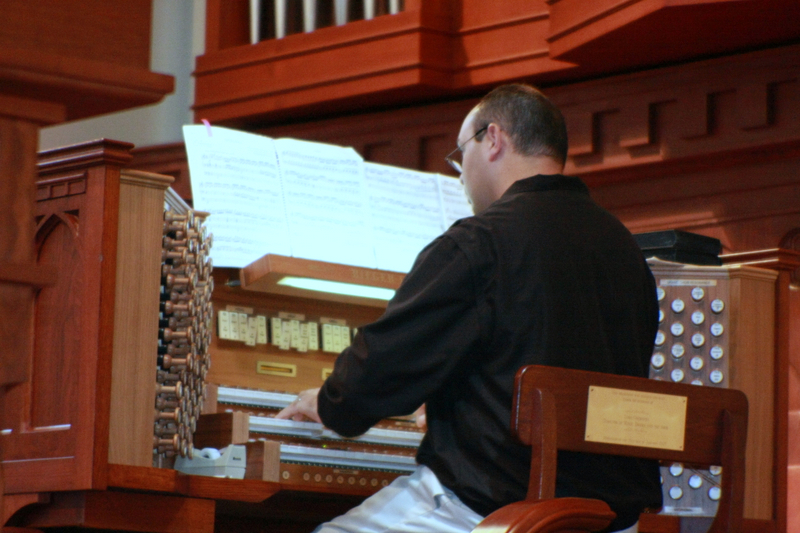 The most striking feature of the new church, and one it should rightly be proud of is it’s pipe organ. The organ was built by Rieger – Kloss, Euro Musik Corporation from Krnov in the Czech Republic. The 47-rank organ has over 3500 pipes, and took approximately 18 months to construct in Europe, before being transported to the United States for assembly. Tour members were treated the performance of a piece of classical music on the organ by Rev. Jared Wilson (Minister of Music), and it was heavenly. 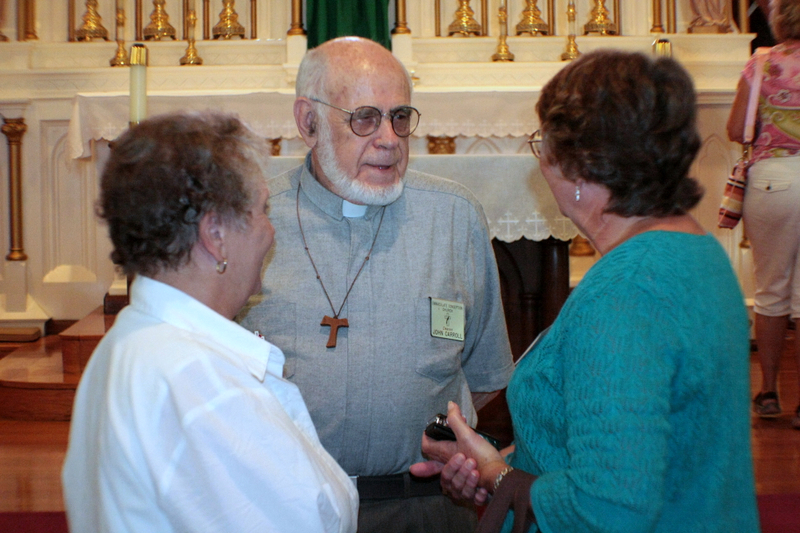 The third stop on our tour was the Immaculate Conception Catholic Church which is on the National Registry of Historic Places. Our tour guide at this location was Deacon John B. Carroll, SFO. The church which was constructed in 1880 is a place of peace, beauty, and serenity. Outside the Church is lovely meditation gardens including statutes of the Virgin Mary, Saint Francis of Assisi, a rose garden, and a memorial to the innocents souls lost by abortion. 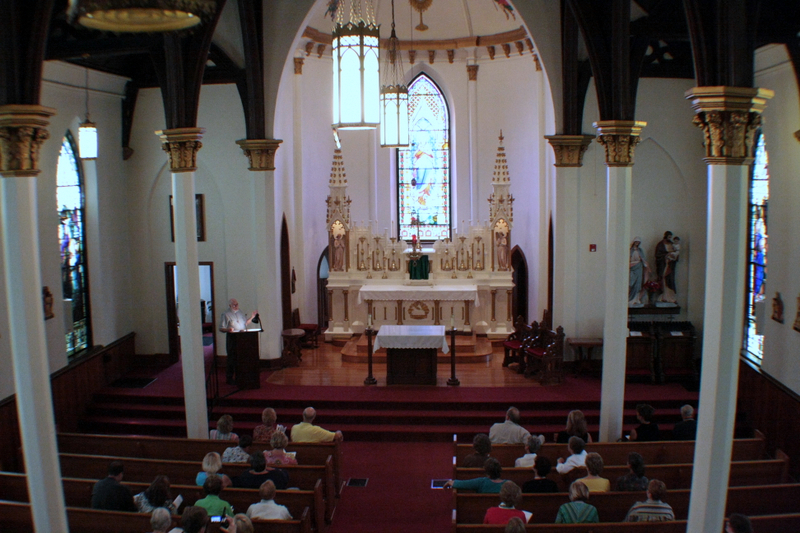 The church inside is striking. Starting with the altar which is packed full of symbolism: the colors of the veil; the symbol of the lamb; the vigil light; to the angels which flank the tabernacle and adorn the sanctuary dome. The stained glass window behind the altar depicts the Virgin Mary and the Immaculate Conception. The church also features another 15 stained glass windows, each one showing a different image and designed to teach us different lessons. Take it from me, you can spend hours studying each of the glorious windows, and a lifetime learning each of the lessons enshrined within these walls. There are many more treasures waiting inside for you to discover but I leave to you to find them during your own tour of this unique church.

The final stop on the tour Tip top, the home of Rubye and Elwyn Patch. 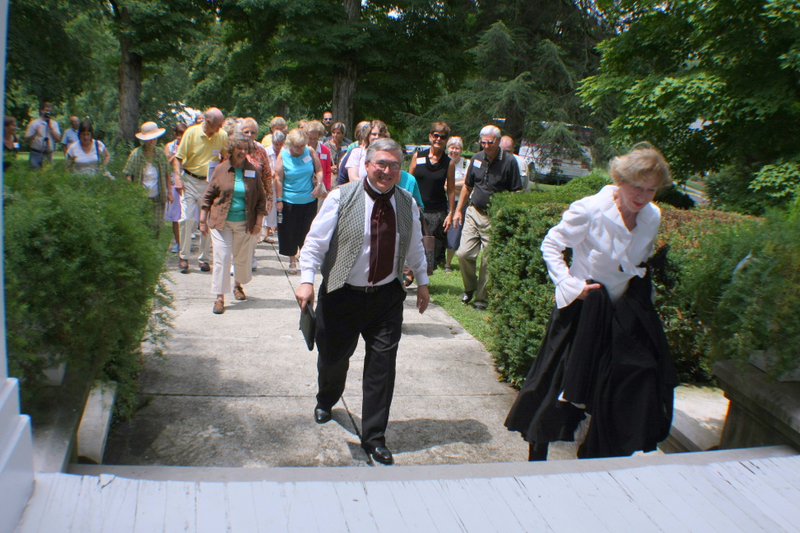 Waiting for us on the front lawn was Hugh Dunlop (APSU President Tim Hall), he was joined soon after our arrival by Sarah Pennington Williams (Rubye Patch), and Boy (Elwyn Patch) who treated each of us as if we were members of their family.

Sarah related the story of their home, including the recent marriage of Hugh to Mattie (County Trustee Brenda Radford). We were then treated to the experience of Hugh serenading Mattie (who was on the balcony) from the front lawn while Sarah’s 14 year old son Fred (Brenda’s real life brother Scott Emerson) played the violin. The song was “Beautiful Dreamer,” by Stephen Foster. Afterwards we were invited inside by Sarah who then formally introduced us to Mattie and Fred, Colonel S. D. Bruce (Jerry Ross) of the Union Army, and of course to her maid. 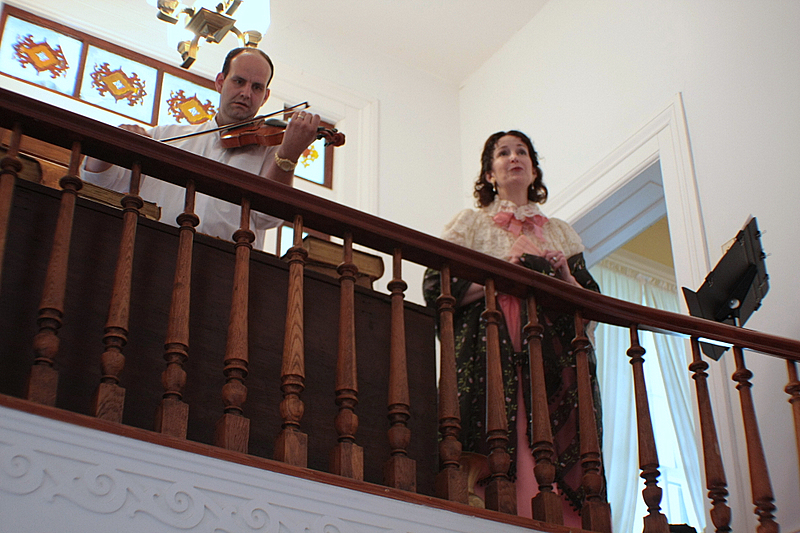 Sarah persuaded Mattie to serenade us with another lovely Stephen Foster song which was enhanced by utilizing the acoustics created by the grand spiral staircase.

I must compliment both Tim Hall and Brenda Radford on their singing ability, and their willingness to take time out of their busy schedules to perform for us on this day. We must also not forget Scott’s talent with the violin. They were also each excellent actors who drew us into their performance.

Sarah also told us the saga of the Fuss Cake, and that we would soon be treated to a sample of this delicious cake. She invited to walk about the home and then when we finished to join them for a snack in the dining room.

Petinka Bailey Foskett loved to cook as did her best friend, Mary Dunlop. In the late 1920’s (or there about) Petinka returning from a trip brought back a “NEW recipe” which she then served to Mary, asking her not to divulge the secret to this coveted “recipe” until she had had a chance to serve it at a planned bridge party, two weeks later. Mary agreed giving Petinka her solemn word.

One week later while Petinka was at a high society tea in the antebellum dining room of Mrs. Will Daniel Clarksville’s grande dame, she spotted her friend Mary, the co-hostess coming through the swinging door with a silver tray bearing her prized “secret” cakes/cookies.

Before dark the same day, an additional telephone operator had been brought in to handle “business” as the phones all over Clarksville stayed busy until past bedtime divulging to everybody Petinka’s “secret recipe.”

After this Petinka (nickname for pretty thing) was know sub rosa as “PeStinka!”

For me Tip Top was the highlight of the day’s tour. As of this time Mrs. Patch does not intend for Tip Top to be one of the locations on the Clarksville Writer’s Conference tour next year. I am sure that whatever locations are placed on the tour next year will make that tour just as memorable as this year’s tour was!

Here is the Rubye Patch’s recipe for fuss cakes.

Note: If you use a sweet jelly, such as strawberry, you might want to cut the granulated sugar to 3 or 4 tablespoons instead of 5. Be sure to use real butter.

Every true supporter of the arts should already be a member of this worthy organization. They help make Clarksville’s culture richer by promoting the local arts. In addition to the yearly Writer’s conference they are a driving force behind many of the art programs in our community (Art Walk, Youth Chorus, Arts in Motion, Youth Orchestra, Open Studio Tour, Poetry Reading Evenings, Collaborative Workshops, Writer’s Conference, Livable Community Fair, Traveling Quilt Show, Speakers Bureau, Student Art Gallery, and Public Art in general) So if you are not yet a member consider joining, or at the least volunteering your time to assist them in their worthy endeavors.