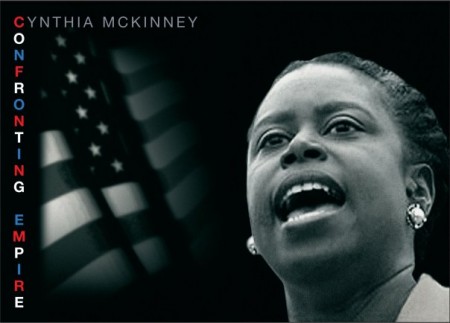 Green Party candidate for President Cynthia McKinney will be visiting Tennessee to speak to voters and campaign in Memphis, Jackson, Dickson and Nashville this Wednesday and Thursday August 20 and 21.

Wednesday, August 20th McKinney will make 3 stops in Memphis. That evening she will be in Jackson, Tennessee for a fundraiser hosted by the Madison County Green Party.

Thursday, August 21st McKinney’s first stop is in Dickson to meet with representatives of the community who have been affected by the dumping of toxic waste in their community. Then to Nashville for an 11:00 AM Press Conference in Room 31, Legislative Plaza speaking to the press about her campaign. This event is open to the public. Following the press conference Ms McKinney will speak directly to the public and take questions. This will also be in Legislative Plaza, Room 31.

That morning Greens will turn in their nominating petitions to secure her position on the general election ballot in Tennessee. “Due to Tennessee’s oppressive election access laws Ms McKinney will be listed on the ballot as an independent candidate which we can achieve with 275 valid signatures. It would take over 45,000 valid signatures to get her listed with the “Green” affiliation. The Green Party is currently a litigant against the state seeking ballot access laws that are fair”, said John Miglietta a delegate to the Green Party of the US and a Green Candidate for US House District 5.

Following the Press Conference she is scheduled to visit Tennessee State University, Fisk University and Carver Food Park where Sizwe Herring of EarthMatters Tennessee teaches children and community members about the value of composting and principles of ecology.

As the Green Party candidate, issues of environmental and racial justice will highlight her Tennessee visit. “Cynthia has chosen to visit people and places that the Democrats and Republicans would would rather forget, such as the victims of environmental racism in Dickson, Tennessee. I think this is why Cynthia is the best choice this election season, because it is clear that she is the people’s candidate,” said Chris Lugo Green candidate for the US Senate.