More than 100 Christians from across Montgomery County gathered at the old Montgomery County Courthouse Thursday at noon for a revival-style interdenominational Cry Out America ceremony linked to 9-11 memorials.

The hour-long ceremony was coordinated by Beverly Blackard of Little Hope Baptist Church, who became involved with the nationwide program while recently attending the Tennessee Baptist Convention, when participants were told of the need for a coordinator for Montgomery County. Blackard responded to that call, and  said “the Lord sent me here.”

“God appreciates you being here in this public space,” Blackard told the crowd.”Terrorists tried to take over our country and they failed. We have all been affected by what we have witnessed.”

There is something that God wants us to say today,” said Pastor Madewell. “And that is that we are free worship and serve God and stand firm in his word.” In the audience, people nodded, murmured “Amen” and raised their hands to the heavens.

Former legislator Kim McMillan and Representative Curtis Johnson both read from the writings of our founding fathers, citing quotes from George Washington, Thomas Jefferson, and Abraham Lincoln alluding to America as being rooted in Christianity. 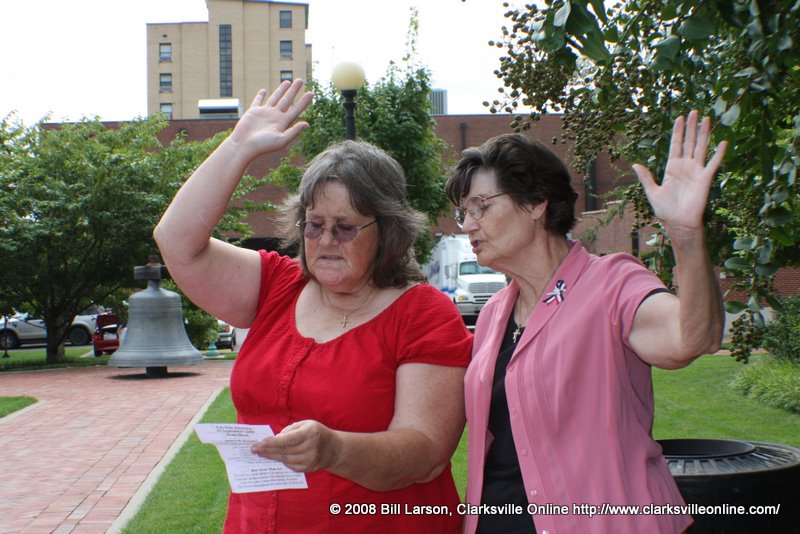 Pastor John Renken of Extreme Ministries spoke of the friends he has lost in the post-9-11 war in Iraq; it was the only significant acknowledgment of that new day of infamy, the Cry Out America rally was advertised as a 9-11 ceremony.

“God opened every door to me,” Beverly Blackguard said in explaining how the rally came together and this “public” place came to be used for this event. Montgomery County provided chairs for seating at the foot of the courthouse stairs, and a sound system carried the speeches and prayers through the courthouse site and into the streets.

The program included two semi-secular songs, America the Beautiful and God Bless America, and the Christian hymn How Great Thou Art.