The Clarksville Community Concert Association held the fourth of their planned five concerts in their 2009-2010 Concert series with a performance by the Gateway Chamber Ensemble at Austin Peay State University on Monday evening. The Community Concert Series is co-sponsored by the APSU Center of Excellence for the Creative Arts,  and brings in world class performers to give concerts in our city.

World Class is a description which easily fits the Gateway Chamber Ensemble, which is based around Austin Peay State University’s outstanding performing faculty and supplemented with the area’s leading professional musicians. Members of the ensemble include Lisa Vanarsdel-flute, Jeanette Zyko-oboe, Mingzhe Wang-clarinet, Brian Horner-saxophone, Dawn Hartley-basson, Francis Massinon-horn, Emily Hanna Crane-violin, Shu-Zheng Yang-viola, Michael Samis-cello, Timothy Pearson-bass, and the group is conducted by Gregory Wolynec. They perform milestone works of  chamber music both from the past and from the present. 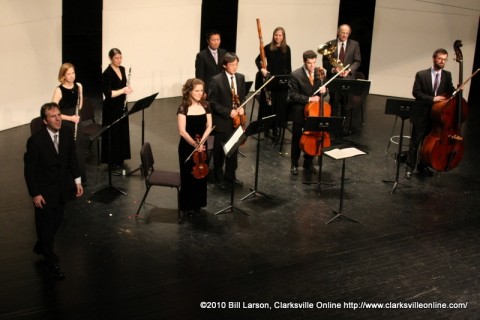 The Ensemble performs regularly  as a part of the Dimensions New Music Series which is held at the campus of APSU, as well as in traditional concert settings throughout the region.

The first act was composed of Martinu’s Nonet.

The Nonet was composed in 1959, and premiered at the Salzburg Festival by the Czech Nonet to whom it was dedicated, a month before the composer’s death. The Nonet was inspired by the music and musicians of the Czech countryside, particularly Bohemia and Moravia. Its other influence was the music of Haydn which Martinu studied and grew to love during his stay in America. Despite being composed so near the time of his death, the Nonet is optimistic, life-affirming music.

The Gateway Chamber Ensemble is releasing a CD is entitled Wind Serenades, a recording of works by Strauss and Mozart. The CD will be released on March 7th by Summit Records, and it will be available via Amazon on March 9th.. They are also working on trying to get the the CD in the local Borders and Hastings stores. At a small reception held after the concert on Monday, they made pre-release copies available to the audience.

The Joel Frahm Jazz Quartet to perform in next concert

Born in Racine, WI in 1969, Frahm attended the Mason Gross School for the Arts and earned his B.A. in Jazz Performance at Manhattan School of Music. He Released three highly regarded CDs on Palmetto: “The Navigator”, “Don’t Explain” (with Brad Mehldau), and “Sorry No Decaf.” “Don’t Explain,” his latest, was the number one jazz release for radio in the United States for two consecutive weeks in 2004, according to jazzweek.com. Joel was also recently selected in DownBeat Magazine’s Critics Poll as Rising Star in the category of tenor saxophone.

The CCCA is a nonprofit organization dedicated to presenting musical performances of high merit to Clarksville-Montgomery County. The CCCA is partially funded by the APSU Center of Excellence for the Creative Arts. Information about the concert series and the Clarksville Community Concert Association is available online at www.clarksvillemusic.org. They will be presenting their 2010-2011 schedule at an event they will be holding in April, look for more information on that here very soon!

If you are a supporter of the arts in our community, and are are not currently subscribing to the series, please consider becoming a member!