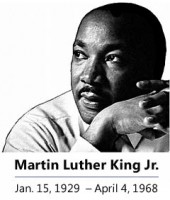 Clarksville, TN – People of all races gathered together in Clarksville yesterday to remember the contributions of Dr. Martin Luther King Jr to the culture of America. He was also a major driving force behind the Montgomery Alabama Bus Boycott where 17,000 African Americans boycotted the Montgomery Bus Company. His mixing of Civil Disobedience and non-violence set America on the course to ending the stain of segregation on our society, giving African Americans the right to vote, and the Civil Rights Act which prohibits discrimination on the basis of race.

While we as a country have made a lot of progress, we still have a long way to go towards true equality in this nation. There continua to be disparity between black America and white America in terms of income, education, and jobs. Even the scales of justice are not always in balance where the races are concerned.

The March on Washington for Jobs & Freedom

I have a dream speech

The local branch of the NAACP organizes an annual march through Historic Downtown Clarksville, TN in Remembrance of Dr. Martin Luther King Jr.