Over the next four years, there will be a variety of offerings, for young and old alike, to reflect, relive and learn about Montgomery County’s role in the Civil War. 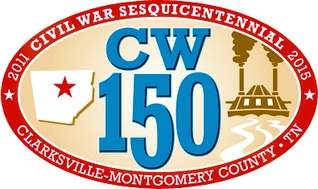 Clarksville is home to the newly-opened Fort Defiance Civil War Park and Interpretive Center, located at 120 Duncan Street. Early in the Civil War, this hilltop bluff overlooking, the confluence of the Cumberland and Red rivers, was chosen by Confederate army leaders as a site to construct a fort to defend the river approach to Clarksville. Then known as Fort Sevier, it was captured without a fight by Union forces in February 1862, renamed Fort Bruce and occupied for the remainder of the war. The site was a magnet for runaway and freed slaves, and many were employed in and around the fort.

Fort Defiance remains remarkably well preserved including the outer earthworks, powder magazine and gun platforms which are still discernable. The Interpretive Center features a 1,500-square-foot exhibit and a film titled “Crossroads of Change” that explains life in Clarksville as well as life in the surrounding area and the fort during the Civil War era. For more information, visit www.fortdefianceclarksville.com.

In the coming months there are several great events planned for the Civil War enthusiast as well as novice.

A few that are being planned include:

There will be more details to follow on all of these events. Information on these and much more can be found on the CW150 website, www.clarksvillecivilwar.com.  If you have an event that you would like to have sanctioned by the Civil War 150 Commission, please contact the Commission through the website.