HomeNewsRicky Skaggs Combines his Love Of Country And Bluegrass Music for his...
News 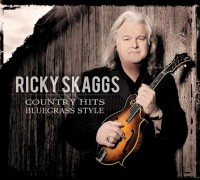 Nashville, TN – Musical legend Ricky Skaggs’ newest CD, “Country Hits Bluegrass Style” (Skaggs Family Records), will be in stores Tuesday, July 19th. The 14-song release is a mix between Skaggs’ country and bluegrass roots, something he has been sharing with fans around the country during his current Treasure Chest Tour.

Both bluegrass and country lovers alike will enjoy the bluegrass instrumentation along with the impeccable tenor voice of Ricky Skaggs, the man who “single-handedly” saved country music in the early 80’s, according to renowned guitarist and producer, Chet Atkins.  Ricky’s eight-time IBMA Instrumental Band of the Year, Kentucky Thunder, along with some of Ricky’s original award-winning country band alumni, and special friends add to the magic of this album.

“We did such good music in the 1980s and early ’90s that a lot of fans still shout out ‘Honey (Open That Door),’ and I felt like we needed to do those songs for them, too,” explained Skaggs.  “For years now I’ve had fans come up and ask me to do a CD that would have my old country hits on it.  So here it is, done a little different than the original recordings.  These were done in more of a bluegrass style.  Folks have loved it when we play them on the road.  Sure hope you love them too.”

Skaggs’ first two country #1 singles and standouts on the new album, “Crying My Heart Out Over You” and “I Don’t Care,” are accompanied by eight more #1 country hits, such as “Cajun Moon” and “Highway 40 Blues.”  Ricky’s superior guitar skills are showcased throughout this bluegrass rendition of his fan-favorite classic, “Country Boy.”  Other songs include “Uncle Pen,” the first bluegrass tune ever to hit #1 on Billboard’s country chart, “Don’t Get Above Your Raising,” “He Was On To Something (So He Made You),” and “Somebody’s Prayin’.”

14-time Grammy Award winner Ricky Skaggs is well known for both his country music classics as well as his bluegrass hits.  Skaggs started his own record label, Skaggs Family Records, in 1997 and has since released 12 consecutive Grammy nominated classics.  He has won a total of eight ACM Awards and eight CMA Awards, including CMA Entertainer of the Year in 1985.  Skaggs’ latest album, MOSIAC, released in August 2010, marked his return to a full band sound with melody and lyrics that speak to his faith.  Skaggs and his band, Kentucky Thunder, are currently on the road for the 2011 Treasure Chest Tour.