Clarksville, TN – A 63 old grandmother was charged with False Report after claiming to be robbed when it was actually a case of “Insufficient funds” by the man purchasing drugs.

On December 2nd, 2011, 12:50pm, Police were called to 966 Oakdale Drive for a theft in progress which, prior to officers arrival, escalated to a Robbery.

When officers arrived on scene, they were told a man came to the house looking for a man that lived at the residence. The man was allowed to enter the house. 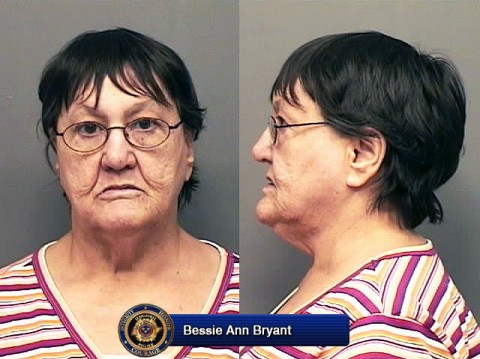 Upon entry the man supposedly grabbed a bottle of prescription drugs, attempted to leave, was blocked by two women in the house, tried to push past them, pulled a handgun, and threatened to shoot up the house if Police were called.

The story changed several times and the truth quickly came to light as Officer Justin Bailey investigated the alleged robbery. First of all, a robbery never took place. The 63 year old woman, Bessie Ann Bryant was short on money and asked a family member to find someone to purchase her prescription drugs. A man was located to conduct the transaction and came to the house.

At first, the transaction was agreed to, but that decision was quickly reversed because of the fear the gun may be stolen. Bryant attempted to stop the buyer because he was short of money, but the man took the pills, his gun, and left. He never pointed the handgun at Bryant and left the $300.00.

After the man left, the robbery story was concocted and Police were called.