Fort Campbell, KY – In preparation for its upcoming deployment, Strike Brigade, 2nd Brigade Combat Team, 101st Airborne Division (Air Assault), sees the need to be familiar with the weapons used by it Afghan counterparts as well as the ones used by the enemy.

The deploying Strike Security Force Assistance Teams did not have to travel far at all for such training and took part in a foreign weapons training exercise at the Don F. Pratt Museum, February 27th.

“These Soldiers will be in an environment where the dominant weapon in theater is the AK-system and they need to be proficient in it’s use both for reason of prestige and because they will be training the Afghan National Police and army in the use of these AK-system weapons,” said John E. Foley, the museum’s technician, collections manager and foreign weapons instructor. “They need to be able to handle these weapons in a proficient manner.” 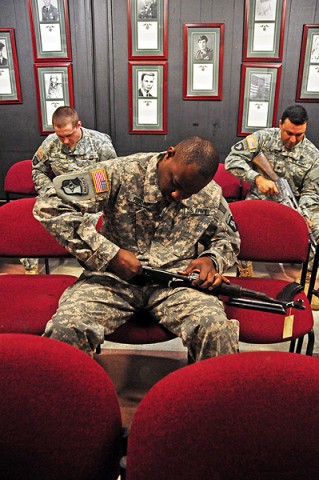 The AK-47 series was the primary weapon trained on, followed by the PK-series machine gun. The RPG-7 series rocket launcher and SVD “Dragonov” sniper rifle, the PPSH-41 sub-machine gun, the Browning hi-power pistol and the Makarov pistol are others weapons seen used in the Afghan theater and were also part of the training. The SFAT members took the training seriously.

“I learned the most about the AK-47 this training on foreign weapons is real important because we learned all the different weapon systems,” said Sgt. 1st Class Yolanda Baird, one of the team members deploying to eastern Afghanistan. “My favorite part of the training was learning how to and then disassembling the different weapons. Mr. Foley was very knowledgeable and I really liked how he used his personal experiences to teach the class. He even taught us ho to booby trap a weapon if we were taken by the enemy.”

Foley grew up in the Army back in the 1960’s and has much hands-on-experience with domestic and foreign weapons. He received formal training on them as a Ranger while on the Aberdeen Proving Grounds Foreign Material Training Team and then became a formal certified foreign material instructor while serving with the 25th Infantry Division. Though now retired from the Army, Foley continues instructing and has created the Screaming Eagle’s foreign weapons training program, tailored to meet today’s battlefield requirements.

The Strike SFAT foreign weapons training is now completed and the subject matter expert was impressed with his pupils.