Clarksville, TN – Pat Donohoe, who has nearly 25 years experience as a Division I football assistant coach, has been named the new defensive line coach at Austin Peay State University.

He replaces Ryan Taylor who left earlier this spring for a high school position in Nashville, TN.

Donohoe returns to coaching after spending the last six years in the private sector. However, prior to that he served 10 seasons as defensive line coach at UAB, working with APSU coach Rick Christophel during his tenure. In fact, the two also spent two seasons together at Mississippi State.

“The No. 1 thing was the ability to work with Rick again,” Donohoe said. “If you coach with a guy and been in the trenches with them, you know how they are going to react.

“I have been around Pat for a long time and know his philosophy, his enthusiasm, his energy,” Christophel said. “Besides being a quality football coach, he has a great rapport with his players. In all the years we were together, I never saw anyone get more out of his players-not just on the field, but off the field as well-as Pat did. It wasn’t a case of him browbeating them, it was a case they just had so much respect for him.” 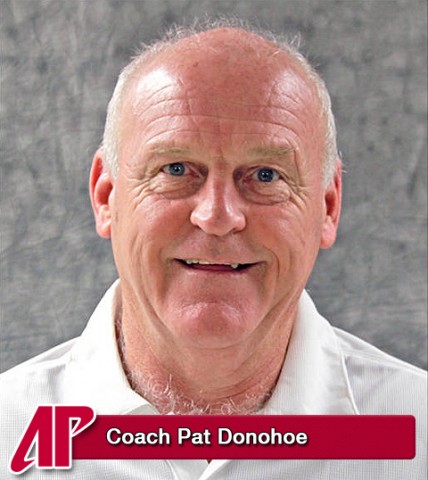 Christophel is excited to be reunited with Donohoe, someone who he not only worked with at UAB but learned from as well.

“He has such great knowledge of the game and knows how to use his experience in not only teaching the players but those (coaches) around him as well.”

Donohoe joins Jason Palermo as new coaches on the Govs 2012 staff. Palermo was hired prior to spring practice to be the offensive line coach.

“We have made some steps to improve our staff, and that is not to say the guys we had here didn’t do a good job,” Christophel said. “But to get a guy of Pat’s background and experience, we are very lucky, just like we were to get someone with Jason’s background.

“Both bring a different energy level and both are good recruiters.”

Donohoe coached from 1995 to 2004 at UAB before becoming head coach of the Berlin Adler, of the German Football League, for one season. Under Donohue’s guidance, the UAB defensive line was considered one of the nation’s best. During the 2001 season, the Blazers had the No. 1-ranked rush defense nationally and were No. 5 in total defense.

In April of 2002, defensive end Bryan Thomas became the Blazers’ first-ever player selected in the first round of the NFL draft. Defensive tackle Eddie Freeman was tabbed soon after as a second-round choice of the Kansas City Chiefs.

Thomas was the third No. 1 draft choice coached by Donohoe-he coached both Eugene Lockhart (1984/Dallas Cowboys) and Lamar Lathon (1990/Houston Oilers) while at the University of Houston for 12 seasons (1980-92), where his duties ranged from coaching linebacker to serving as special teams coach and recruiting coordinator.

Donohoe left Houston and spent two seasons on Jackie Sherrill’s staff at Mississippi State, the first time he and Christophel coached together.

Donohoe began his coaching career with a two-year stint at Boyden-Hill High School in Iowa. After spending one year each as first an assistant and then head coach, Donohoe returned to his alma mater, Wayne (Nebraska) State University, as a graduate assistant.

During his playing days at Wayne State, Donohoe was a four-year starter at middle guard and earned NAIA All-America honors as Wayne State’s athlete of the year in his senior season.

In three seasons, he was named both all-conference and the team’s Most Valuable Defensive Player. At ceremonies during the Blazers’ season opener at the University of Nebraska in 1998, Donohoe was inducted into the Nebraska Football Hall of Fame.