Clarksville, TN – My memories of Mickey Fisher began when I returned to Clarksville Tennessee in 1971. There were only three high schools in Clarksville at the time. Clarksville High School, Northwest High School and Montgomery Central High School.

I started dating a cheerleader at Northwest, and since I didn’t go to high school here, I immediately hated Clarksville High School, (my girlfriend told me to).

When Northwest and CHS played each other, the entire city shut down, and everybody went to the game. I saw Mickey play a few games, but only when they played Northwest.

I would get to know Mickey many years later when his son Ryne started making a name for himself on the local golf scene. I never was one of his “close” friends, we didn’t have a history growing up, but I played a lot of golf with him and Ryne. I wish I had known him longer.

Michael Dixon Fisher was born November 30th, 1953 in Stinton, Texas,  the son of George and Myra Fisher.  Mickey would grow up to be a wonderful son, brother, husband, father, and a man that nobody could ever say anything bad about.  His sister, Stephanie Roberts, remembers her brother as “Not your typical little brother. We had a great life, with wonderful parents and we were always doing something. We didn’t have computers, cell phones and video games, so we had to go out and do things.  Sports was always a big part of our lives, and Mickey loved all sports. He wasn’t that annoying little brother you hear about all the time.” 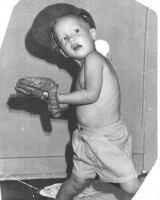 Mickey’s father, George,  played and coached at Austin Peay State University with the legendary Dave Aaron. Their families spent a lot of time together. Dave Aaron, Jr.  said,  ” Mickey never felt any pressure to be like his dad, but always wanted to make his dad proud. He and I grew up together. We both knew what it was like to be a coach’s son. We had keys to the gym, and we played all the time. Mickey was my best friend in the world, and I miss him terribly.”

Mickey Fisher had an amazing high school career. Playing basketball  for coach Ben Fendley, one of the trademarks of coach Fendley’s teams was that they were always in great shape. Dave Aaron, Jr. said,  “We would go to practice knowing it was going to be tough, but coach Fendley said we were never going to run out of gas against the other team, and Mickey loved it.  He was always in great shape.”

When Clarksville High started a golf team, Ed Sneed was asked to be the coach. “I jumped at the opportunity,” said Sneed.  “Mickey was a junior at the time, so he was one of the leaders on the team. I remember our first official tournament was against Fort Campbell, and they beat us pretty good. It’s ironic that Mickey coached at Fort Campbell all those years, so I think it’s only fitting that the Mickey Fisher Memorial Tournament is held at Cole Park at Fort Campbell because Mickey is forever linked there.”

When I asked his friends and family what was the one thing they would remember about Mickey, everyone said the same thing. “He was always there for you. If you asked him to do something, he would do it.”

His good friend and constant golf partner,  Bob Cartwright, told me, “I always liked playing in tournaments with Mickey as my partner because I knew he would always be there and would never quit.  He would never give up.”

After graduating from Clarksville High School, Mickey Fisher went to Austin Peay State University to play basketball. It was there that he played for coach Lake Kelly, and with the legendary James “Fly” Williams. Tomorrow, what that experience was like, and what he learned by playing with “Fly” and by being Fly Willliam’s  roommate.