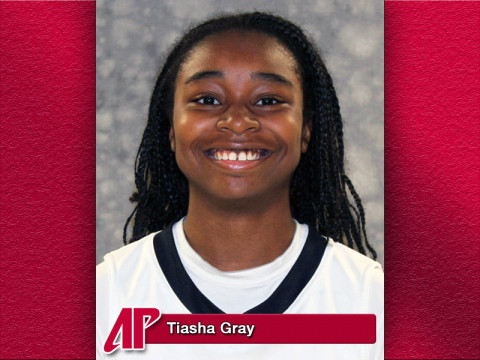 She played in all 27 contests and started eight times. She is the first Lady Govs player selected to the all-newcomer squad since Ashley Herring (2007-08).

“I am so proud of Tiasha for earning this award,” said Lady Govs head coach Carrie Daniels. “I am pleased the rest of the conference recognized her talents and abilities. There was definitely a learning curve this year for Tiasha, but she put in the time outside of practice and continued to push herself. No doubt if she continues to work she has the ability to be an all-conference player throughout her career and make a difference within our program. I know she will take this season as a valuable lesson to learn and grow towards the future.”

Gray saved her finest work for OVC action where she averaged 9.7 points, 2.7 assists and 2.5 steals per game. She ranked 26th among league scorers, 14th in assists and second in steals during league play.

The last five games saw Gray show a glimmer of her potential, averaging 16.4 points per game during the closing stretch. She also averaged 4.6 assists and 2.8 steals per game while making 41 percent of her field-goal attempts. Gray set her personal scoring best three times in the final five contests, scoring 15 points at SIU Edwardsville, Feb. 16; 16 points at Eastern Kentucky, Feb. 23; and then posting 22 points against Belmont.