The Lady Govs (12-18, 3-9 OVC) never led in either game, with the Colonels getting out to a 3-0 lead in the first game after four-and-a-half innings by scoring single runs in the top of the second, fourth and fifth.

Eastern Kentucky (23-14, 10-4 OVC) scored its first run on the Lady Govs lone error of the day, as Lauren Mitchell came in when Shelby Norton misplayed a ball off the bat of Carissa Reisinger.

The run in the fourth came on an infield out, following a leadoff double by Christina Ciolek – who got to third via a stolen base.

EKU’s final run also came on an infield out, with Raquel Howes – who got on by a triple down the right field line – scored on a groundout to short by Katie Tackett.

Howes and Haley Schenasi had two hits each to lead the Colonels offense in the opener. 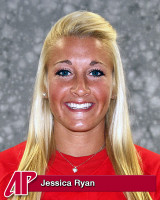 The Lady Govs lone run came in the bottom of the fifth inning, on a single by Jessica Ryan that drove in Courtney Brower – who reached on a fielder’s choice.

Ryan and Marissa Lake had two hits each to lead Austin Peay, while Mel Pavel and Norton had the other two APSU hits.

In Game 2, Eastern Kentucky used the long ball to get out to a quick lead, with Sarah Fobbs clearing the fence in left field with a two-run shot in the top of the first inning to give the Colonels a 2-0 advantage.

Fobbs, Mitchell and Reisinger had two hits each to lead EKU. 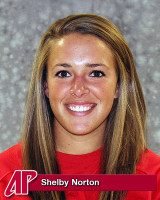 The Colonels would add a single run in the second inning on a sacrifice fly by Melissa Costa, to bring in Mitchell – who had opened the inning with a single.

Two more runs would come in for Eastern Kentucky in the top of the fourth inning, as the Colonels recorded three hits in the inning – with Ciolek driving in Nicole Heitz with a double – and later scoring on a fielder’s choice by Costa.

The Colonels final run of the day game in the fifth inning, on a single by Mitchell scoring Howes – who opened the inning by drawing a walk.

The Lady Govs run in the nightcap came in the bottom of the fifth inning on Norton’s third home run of the season.

Lauren de Castro would have the Lady Govs only other hit in the second game.

Austin Peay is off until April 13th, when they host SIU Edwardsville for the start of a three-game OVC series.