Clarksville, TN – Local singer and songwriter Lydia Walker performed at 3:30pm Saturday, April 20th on the Family Fun stage at the Rivers and Spires Festival. She was the opening act for Building 429.

“I had a great time. It was an awesome crowd. We ended up have amazing weather. Not to hot, not to cold, it was perfect,” said Lydia Walker. “I am so excited to be apart of something so special to Clarksville, my hometown.”

During her first song, people began to fill the First Baptist Church parking lot in front of the stage. By the end of her set, the streets beside the parking lot was lined with people listening to her music.

Walker, with her acustic guitar, performed some of her original songs such as “Successfully You”, “Butterfly”, “Shades of You” and “When I Dance”. She is a talented young muscian with a strong vocals. She began writting songs when she was twelve and has seven independent albums to her credit.

“I was in the Kids Zone with my children when I heard her music. I came over to see who was singing,” said Sheila Miller from Hermitage, TN. “She has a great voice. I love the words to her songs and the message behind them.”

The song “Butterfly”  tells of a little girl who has a hard time in the classroom, getting picked on and feeling left out. Throughout the story, you can see her transformation as she realizes that she is beautiful. “Butterfly” was co-written by Walker and producer Curt Ryle.

Walker also hosts her on radio show twice a week called “The Lydia Walker Show” on 105.1 FM WVRY. “On my show, I interview different people in our community as well as play new music and share upcoming artists with my listeners,” stated Walker.

If you missed her at Rivers and Spires then you missed a great show. When you get the chance, go to one of her local performances. You wont be disappointed. 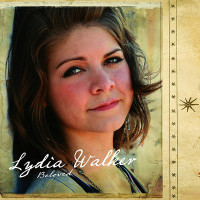 Lydia Walker is an alternative folk singer/songwriter and worship leader from Cunningham, TN. Since the age of 12, she has been writing and performing her own songs, accompanied by her acoustic guitar. She has performed at coffee shops, colleges, festivals, and led worship for many churches.

Walker recently released her 7th independent album, “Beloved“, co-written and produced with Nashville hit songwriter Curt Ryle. Her goal is to inspire people with a message of hope.

Walker also hosts her own radio show, “The Lydia Walker Show” on 105.1 FM WVRY Tuesdays and Fridays, 11:00am to Noon.

Learn more about Lydia Walker on her website at www.lydiawalkermusic.com