Clarksville, TN – At Saturday’s football game against Jacksonville State, the Austin Peay State University athletic department will be recognizing the men’s tennis team, which won the 2013 Ohio Valley Conference Championship for the first time since 1974, as well as 92 APSU student-athletes on the 2013 OFC Commissioner’s Honor Roll.

In addition to the student-athletes we see on the field of competition every day, the Austin Peay athletics department also is recognizing three of our Community Heroes, honoring those that make Clarksville a great place to live. 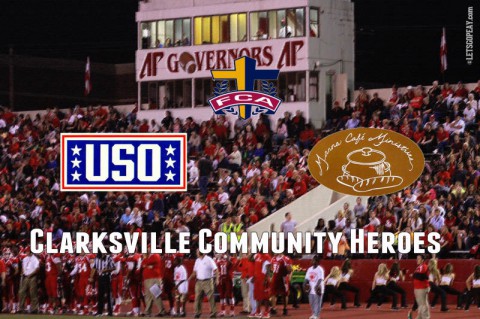 Founded in 2008 by Kenny and Vicki York, Manna Cafe has helped thousands in the community with hot meals, non-perishable food items or sometimes just a friendly face. Manna Café’s methods and programs have expanded over the years, but the mission is still the same: to restore hope, love, and dignity to the broken and downcast.

Those in the community looking to volunteer with Manna Café can take part in Combat Hunger, November 9th, at several locations in Clarksville. Contact to sign up.

The Austin Peay Fellowship of Christian Athletes (FCA) chapter has partnered with Manna Café for several years now in their annual ‘Govs Give Back’ drive to provide for those in need in the Clarksville community.

Led by Andrea Mangrum, wife of baseball assistant coach Joel Mangrum, the FCA is currently preparing for its December 7th ‘Govs Give Back’ event and need to raise an additional $2500 for food distribution that will occur that day between 8:00am and 2:00pm.

The Clarksville-Fort Campbell community is proud of its military and the service they provide our country. The Fort Campbell USO (United Service Organizations) has lifted the spirits of thousands of troops and their families since it opened in 2011. The USO Center on base provides free programs and services to soldiers, including free monthly Dine on Our Dime events and other family friendly programs.