Clarksville, TN – Pitcher/utility player Lauren de Castro, of the Austin Peay State University softball team, has been named this week’s Copies in a Flash APSU Athlete of the Week. 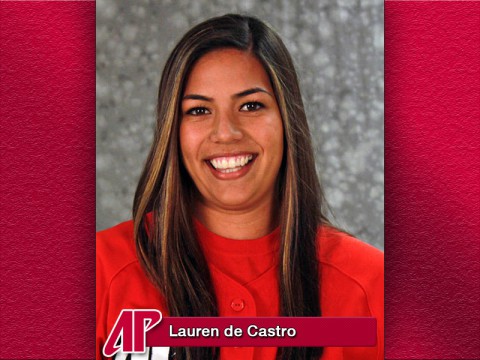 de Castro hit .619 (13-for-21) last week, leading the Lady Govs to wins against Radford and Campbell at the Frost Classic. She drove in a team-high five runs and scored four, batting .706 (12-for-17) in five games in Chattanooga.

The Torrance, CA native picked up the win in the circle for the Lady Govs against Radford, allowing just two hits over 5.1 innings pitched and striking out six – she also went 2-for-3 with a run scored against the Highlanders.

She drove in the game-winning run on a double to right-center in extra innings against Campbell, while going 3-for-5 with two RBI and two runs scored against the Camels.

Senior Marco Iten, of the men’s golf team, shot a 221 (72-78-71), including a squad-best 71 in the final round to give Austin Peay a tie for fifth at the Wexford Plantation Intercollegiate; Iten finished tied for fourth overall as an individual.

Freshman forward Beth Rates, of the women’s basketball team, recovered from a foul-plagued first half to net a double-double (12 points, 10 rebounds) against Eastern Kentucky.

Freshman jumper Kaylnn Pitts, of the track and field team, won the triple jump at the Ohio State Tune-Up with a personal-best 12.26m (40’ 2.75”) leap that places her second in the Ohio Valley Conference entering this weekend’s OVC Indoor Championships.

Senior guard Travis Betran, of the men’s basketball team, averaged 23.5 points in two games last week, hitting 53.3 percent (16-for-30) from the field and 76.9 percent (10-for-13) from the free-throw line against Morehead State and Eastern Kentucky.