Clarksville, TN – Looks like another sister act is coming to Clarksville. 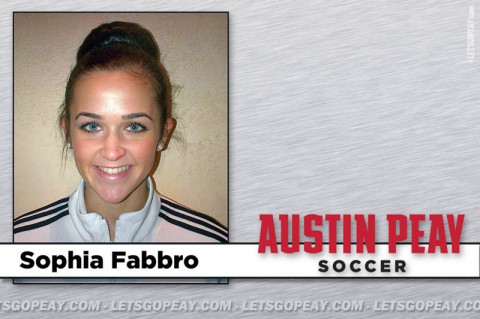 The younger Fabbro is a versatile player with experience from center back to forward and could find a home at any number of spots in the Lady Govs lineup.

In addition to Gina’s exploits on the field for Austin Peay last fall, their father Steve was a golfer for Arizona State and their grandfather played hockey at Michigan Tech.

Fabbro plays club ball for Coquitlam Metro-Ford SC, winning provincial and national championships with the squad in 2010. She was Rookie of the Year for Centennial High School in both soccer and volleyball during her freshman season.

This signing gives Austin Peay a nine-person class for the 2014 recruiting period.

“Sophia is a great addition to this class,” said head coach Kelley Guth. “Her sister was a great asset for us last season – although Sophia is different in many ways, she also possesses many of the same qualities her sister has that will make her a competitor in our conference.