Prove it: Day Three: I Lied 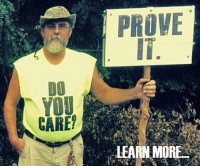 Clarksville, TN – Kenny York, Founder and Director of Manna Café Ministries, will be spending the next two weeks as a homeless man in an effort to bring increased awareness and compassion for the homeless. He and the Manna Café team are increasing their efforts to launch a full-time transitional shelter in Clarksville, even though homelessness is “a silent epidemic” in this fast-growing community. This is part four of his adventure.

Well, to start with, I have a confession to get off my chest: I lied. The ground under my tent is not more comfortable than the floor of the bus I slept on the first night. Actually, I didn’t believe it was possible, but I think it’s harder. Even so, I did sleep better. By the end of this two weeks, I’ll probably be able to sleep standing up.

Today got off to a good start. I finished up some extra blog posts that we’ll be releasing soon—I guess all this excitement is giving me a lot to write about. Who would have thunk it? But then I made the mistake of not spending my money on a bus and walking to today’s site (the corner of Kraft and Wilma Rudolph). I walked for more than two hours and still wasn’t there. Luckily, I was able to hitch a ride the rest of the way, but you can bet your bottom dollar that tomorrow I’m taking the bus. It’ll be worth every penny of that $4 for a day bus pass.

When I finally got to my spot, the day got better. It might sound crazy that I’m starting to look forward to standing on a corner with my sign, but I am. I know that God is walking me through this journey, and there’s a presence that’s waiting for me on those street corners that I can’t explain. I look forward to it, or at least I have the last two mornings. I know that the time spent writing and walking to and from those corners is part of the journey too, but it feels like I’m late for work when I’m running behind to get there.

The support I feel as I’m standing is absolutely amazing. I mean, I’m still getting the blank stares. I guess if I were in their shoes and saw a strange-looking homeless man holding a sign on a street corner, I’d have that “what the ????” look on my face too—especially if I didn’t read the paper or watch the news. But a lot of you are honking your horns, giving me the thumbs-up, and bringing me water and food, and that makes the day so much better. Today’s “manna” was chicken nuggets and peaches and cantaloupe (which, next to strawberries, are my two favorite fruits—hint, hint … just kidding … but not really).   :)

I finished the day at a worship and prayer gathering that we have every Wednesday night at the Refuge. We played some music and prayed; we actually did both at the same time most of the night. I’ve spent so much time praying by myself the last few days that it was really good to pray with other believers; my wife, Vicki, was there too, so I got to spend a few minutes with her as well.

I think it’s important to mention some prayer topics so those of you who pray can agree with us. Of course, we asked for favor with city government and the upcoming meetings and votes. We prayed for the wellbeing of our neighbors and that God will have His way in their lives. Ephesians states that we don’t fight against flesh and blood, but in the heavens we can bring down the strongholds of darkness—so we asked for God’s will on earth as it is in heaven, and to send His angels to make it so. We also thanked Him for favor with the media; we have friends in all the local media sources, and they’ve really gone to bat for us. And I thanked God for such an amazing family and team—the ones who are keeping Manna Café going while I’m out here “playing in the woods,” as some seem to think I’m doing.

I want to take a minute and thank my wife, Vicki. Without her, I couldn’t be doing this. While I’m out here standing, writing, and praying, she’s at home praying, and proofing and posting everything I write. She’s home alone, and she’s being my eyes and ears behind the scenes to keep me informed about the stuff I should know—and protecting me from the things I don’t need to know yet. She exemplifies what it means to be a true armor-bearer, and this mission is costing her every bit as much as it’s costing me. So when you pray for me and thank me, please do the same for her.

Oh, and I got a shower last night! The first one since Sunday. I didn’t know hot water could feel so good … and I smell better, too. By the time I got done with the prayer meeting and shower, the buses had stopped running, so I hitched a ride almost back to where my camp is. By the way, I had a really fun time finding my tent in the middle of the woods in the pitch black dark without a flashlight. I guess I know what I’m buying with the first five dollars that come in tomorrow!

I’ll talk to you tomorrow. Peace out.