Charleston, IL – Despite holding an early lead, Austin Peay State University women’s soccer team found itself on the wrong side of a 3-1 decision against Eastern Illinois, Sunday, at Lakeside Field.

With the loss, Austin Peay falls to 2-9-0 (1-2-0 Ohio Valley Conference) in 2014 and sees its four-match winning streak against the Panthers evaporate.

It would be Austin Peay striking first in this one, taking the lead less than four minutes into the game, and once more it was a Fabbro-to-Fabbro connection.

The freshman, Sophia, found her older sister Gina for the latter’s fourth goal of the season and her 11th career tally, tying her with former teammates Natalia Ariza and Joceline Quiceno for eighth all-time.

Most of the Austin Peay offense would flow through the elder Fabbro in the first half. The Coquitlam, B.C., native was responsible for five shots and four shots on goal during the first half.

It would be a short-lived advantage, however, with the Panthers answering less than six minutes later. Madison Carter found Hannah Miller on the run and Miller put the equalizer away from the top of the box. 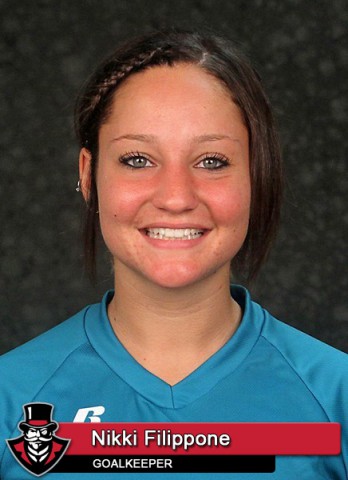 We came out and scored early, and from there it didn’t seem like we handled the situation very well,” said head coach Kelley Guth. “We gave up a poor goal to equalize and then we just weren’t sharp in the second half. I think that quick equalizer deflated us a little bit.”

The sides traded attempts for the half’s remainder, with Austin Peay forcing four saves from Eastern Illinois’ Emily Hinton. The Panthers put just two more shots on net during the opening 45 minutes – one cleared off the line 28th minute, the other saved by junior Nikki Filippone in the 31st.

The Panthers took the lead early in the second half thanks to Meagan Radloff. The 2013 All-OVC first-team selection was found in the box off a set piece from Allie Lakie to net her season’s third goal.

Radloff would put the game away in the 74th minute. Following an Austin Peay handball in the box, Radloff took the ensuing penalty kick and put it past Filippone for the insurance goal. Radloff is now tied for the team lead with four goals and leads the Panthers with 11 points (four goals, three assists).

“Gina was one-on-one with their keeper when the score was still 2-1 and got dragged down in the box without a call,” Guth said. “Maybe things are different if we get that call. But we didn’t play well and EIU gets the credit – they outworked us for the win today.”

Filippone made four saves in defeat, and made a little bit of history in the process – her 60th-minute save against Miller was her 100th career save, making her just the fifth keeper in Austin Peay history to reach that milestone. Hinton made seven saves for the victory.