Clarksville, TN – A matchup of the Ohio Valley Conference’s top two point guards is on tap when Austin Peay hosts Morehead State in a 6:00pm, Monday contest at the Dunn Center. 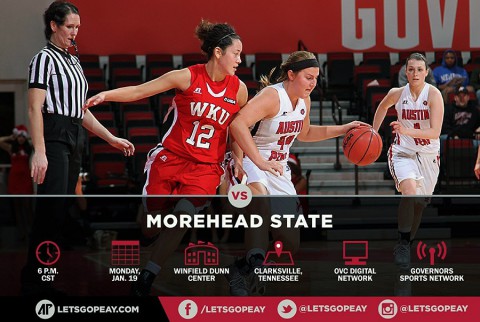 The on-court matchup between Austin Peay guard Tiasha Gray and Morehead State guard Almesha Jones will pair the OVC’s top two point guards against one another for the only time this season.

The Lady Govs fell to 3-2 in OVC action with Saturday’s 81-78 overtime loss to Tennessee State. Both of Austin Peay’s OVC losses have come in the back half of a Thursday-Saturday set. Monday will provide APSU its only three-game in five-day stretch this season.

Defense and rebounding have been the Lady Govs two pitfalls throughout the 2014-15 season and they again won both battles in Saturday’s loss. Austin Peay posted a surprise 57-45 rebounding victory against the league’s best rebounding team as three APSU players (Gray, Tearra Banks and Jennifer Nwokocha) recorded 10 or more rebounds.

Saturday’s result turned on giveaways as Austin Peay committed a season-high 31 turnovers against Tennessee State. The Lady Tigers jumped on those turnovers for 31 points.

Morehead State improved to 3-2 in OVC play by handing Eastern Illinois its second loss of the league campaign, 67-62 on Saturday. Almesha Jones scored 26 points in the win against EIU for her seventh 20-point outing this season.

Morehead State has used just nine players during the OVC slate, with four of those players averaging more than 10 points per game on the season and all four ranking among the league’s top 30 scorers.

The Lady Govs used a balanced scoring attack to post the win with five players scoring more than 10 points. Tiasha Gray, who came off the bench for the first time this season, led Austin Peay with a 19-point, six-steal performance. Nicole Olszewski chipped in 11 points with nine rebounds and seven assists.

The Lady Govs would need nearly all of that lead in the closing minutes. Morehead State found its range in the final 7:30, hitting all six of its second-half three-pointers in that six-minute span. MSU’s Almesha Jones hit the last of those six with 1:03 remaining, trimming APSU’s lead to seven points. The Eagles would get even closer and trailed by five points, 78-73, with 33 seconds left.

Austin Peay finally stabilized the lead at the free-throw line, making 5-of-6 in the final 33 seconds to secure the lead and ultimately the win.