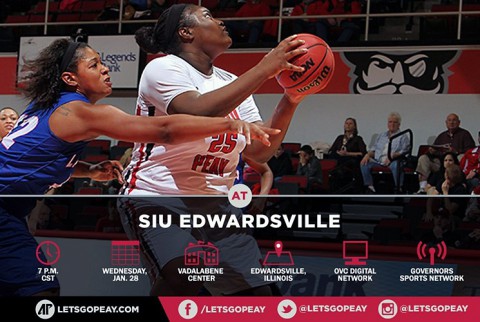 The Lady Govs opened their two-game Illinois swing with a 66-63 victory at Eastern Illinois, Saturday. Austin Peay led nearly wire-to-wire, only trailing for 47 seconds, and improved to 3-1 in road OVC contests.

Junior guard Tiasha Gray was responsible for nearly half of APSU’s offense, finishing the game with  32 points, 11 rebounds, 5 steals and 3 assists.

APSU continues the roadtrip Wednesday in a game that will be a matchup between the league’s top two defensive units – as measured by opponent’s field goal percentage.

Gray has been Austin Peay’s leader on the court this season, leading the team in scoring (20.7 ppg), rebounding (6.6 rpg), assists (5.8 apg) and steals (3.5 spg). She is the OVC leader and ranks eighth nationally in steals, while ranking second among OVC players in scoring (21st nationally) and assists (20th nationally).

About the SIU Edwards Cougars

SIUE opened its quick two-game homestand with a 78-52 victory against Murray State, Saturday. The Cougars have won seven straight OVC contests after opening league play with a three-point home loss to Jacksonville State. SIUE owns a plus-10.2 scoring margin in league play, behind only UT Martin’s gaudy plus-24.3 margin in OVC games.

The Cougars are second among league teams in scoring offense (72.6 ppg) and scoring defense (62.2 ppg), largely thanks to leading the league in free throws made (133) and free throw percentage (80.6).

Junior guard Shronda Butts has seen her productivity jump in OVC play, ranking third among scorers with 18.8 points per game after averaging just 10.2 points per game in nonconference action.

In the first meeting, the Lady Govs put together one of their finest halves of the season and built a 20-point, 42-22, halftime advantage.

Austin Peay then opened the second half with an 11-4 run to build its largest lead of the season – a 27-point, 53-26, advantage with 16:32 remaining. SIUE could only trim the deficit to single digits in the final 30 seconds, closing to within nine points, but would get no closer.

Tiasha Gray came off the bench and for the third-straight game led APSU, scoring 20 points at SIUE with four assists and four steals. Tearra Banks added a then-career-high 19 points to APSU’s winning performance.

In the season’s second meeting, SIUE used a 21-6 second half run to break open the game. Austin Peay would close the deficit to within six points with 6:56 to go in the half, but the Cougars closed the contest on a 15-6 run that saw APSU miss 11 of its final 13 shot attempts.

SIUE’s bench proved the tougher of the two second units in Saturday’s contest, outscoring Austin Peay’s reserves 34-12. The Cougars Tierny Austin led all scorers with 19 points, while Allyssa Decker added 13 off the pine.

Beth Rates‘ star shone brightest for the Lady Govs in the second game – finishing with a team-high 17 points on 6-for-10 shooting. She also led Austin Peay with nine rebounds and seven assists. Gray was held scoreless in the second half to finish with 12 points