Nashville, TN – The Mississippi River Commission recently navigated the Tennessee River and Cumberland River to gain a fresh perspective for the development of plans to improve the condition of the Mississippi River Basin, foster navigation, promote commerce, and reduce flood risk.

The commission met with stakeholders while inspecting the waterways and visited U.S. Army Corps of Engineers Nashville District and Tennessee Valley Authority projects.

The dialogue with community and business leaders and citizens helps the commission with forming a balanced vision and developing water resource engineering solutions for navigation, infrastructure, comprehensive flood control, environmental sustainability and water supply for the entire watershed, which impacts 41 percent of the United States and includes 1.25 million square miles, over 250 tributaries, 31 states and two Canadian provinces.

Norma Jean Mattei, Ph.D., civilian member of the Mississippi River Commission and a civil engineer from Metairie, LA, visited Chickamauga Lock in Chattanooga, Tennessee, August 8th to learn about its concrete aggregate problem and structural concerns, and to receive an update on the stalled construction of a replacement lock.

President elect of the American Society of Civil Engineers, Mattei said participating in an inspection trip and seeing things with her own eyes, like this lock on the Tennessee River, is extremely valuable in her role as a commissioner.

“It’s one thing to listen to someone’s PowerPoint or to their briefing and look at numbers on a table, and maybe a couple of pretty photos, and have them tell you about the issues that they’re experiencing at a certain location,” Mattei said. “It’s quite another when you get to see what that location actually looks like.”

She stressed that being able to visit a project site in person like Chickamauga Lock is very beneficial because of the impact one lock can have on a series of locks on this river.

“So if this lock shuts down, it impacts the locks beyond it. And so when you’re at the site and you see the traffic on the river, you see the condition of the lock, you see the dam, it really drives home the issues you’ve been told and that you’ve read about in a report,” Mattei said.

The commission boarded the Motor Vessel Mississippi in Chattanooga August 8th after touring Chickamauga Lock, and hosted local community leaders to talk about the local waterway. Displays were also set up to inform visitors about TVA operations at dams on the Tennessee River and U.S. Army Corps of Engineers Nashville District operations at the navigation locks, and other missions to include recreation and regulatory functions.

Stakeholders had access to information on how to receive assistance with water resource stewardship and engineering support for local governments such as ecosystem restoration, emergency response, floodplain management, hydropower and water supply.

The commission then stopped over in Decatur, AL, August 9th for additional face-to-face interaction. The 241-foot towboat, which features three 6,300 horsepower diesel engines and is five-stories high, continued moving downstream and crossed through the Barkley Canal and “Land Between the Lakes” into the Cumberland River, arriving at Clarksville, Tennessee, August 11th for another stakeholder meeting while docked at McGregor Park in Clarksville, Tennessee.

Tennessee State Rep. Mary Littleton, 78th District, represents Cheatham County and Dickson County. She came aboard in Clarksville and emphasized that transportation is a big issue across the state and so keeping the waterways open moving commerce is an important issue to the region.

“I know that the barges help relieve traffic on the highways, so I think that is my concern,” Littleton said. 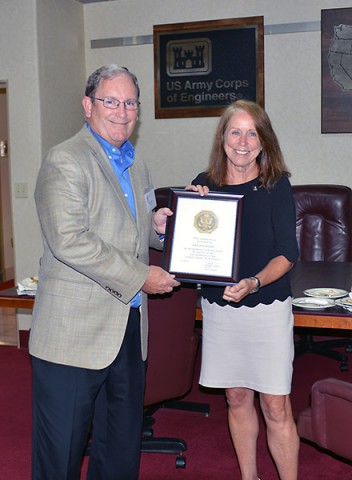 The Motor Vessel Mississippi arrived in Nashville, Tennessee, August 12th and docked at Riverfront. The commission and local community leaders took a walking tour of the city to learn more about the May 2010 flood. The group then boarded the vessel and traveled back up stream on the Cumberland River to Cheatham Lock.

During the voyage, Nashville District officials briefed stakeholders about post flood actions, recreation and its economic impact to the region, hydropower from a national and regional perspective, and the district’s hydropower rehabilitation program.

Roger Lindsey, professional engineer and program manager for Metro Nashville Water Services, spoke about the city’s flood recovery and development of the Nashville SAFE Tool, which stands for “Situational Awareness for Flooding Events.” It is an internal mapping tool to help the city better predict when and where flooding will occur.

Participants were encouraged to provide the commission feedback and Greg Batts, owner of Prizer Point Marina and Resort in Cadiz, KY, asked them to foster better communication with the recreation community on the waterways because they want to be partners, contribute and have input in the decisions that directly affect them.

“We can do a lot of things together, but we have to work together,” said Batts.

The commission culminated its trip to the Twin Rivers with a visit to Kentucky Lock in Grand Rivers, KY, August 13th. They toured and received an update on the status of construction on an additional lock chamber that will alleviate congestion of commercial traffic on the Tennessee River.

Joanne Mann, executive assistant and Congressional liaison in the Nashville District, said it took about four months of preparation so the commission would have the opportunity to conduct the low water inspection and interact with stakeholders on the Tennessee and Cumberland Rivers.

“They’re learning about our projects and our challenges and our issues and where we could use help, and how we integrate with other organizations like TVA and the relationships we have with them,” Mann said. “We also ensure that the stakeholders are given the opportunity to talk about their issues and challenges and what they hope to gain from what the Corps does for them in the region.”

Mattei said the site visits are instrumental because each commissioner sees the rivers and speaks to the people who live, work and recreate on them.

“Whenever I go on these trips it helps me to understand what the issues are in that particular region because the area of the Mississippi River Valley, the entire basin, it’s huge,” Mattei said. “And the issues that are important to a specific person in an area – it depends on where you are, and it depends on who you are. And so by getting into a certain location, say the Cumberland, the Tennessee, talking to all the stakeholders that live and work in that area – the engagement really helps me to understand, and how that fits into the grand scheme of things.”

Approximately 400 people took advantage of a public tour of Motor Vessel Mississippi August 7th when the vessel arrived to begin the inspection trip. The vessel spends more than 90 percent of its time as a working towboat in the Memphis District, moving barges, equipment and supplies on the lower Mississippi River. It was built in 1993 by Halter Marine and is the fifth Army Corps of Engineers towboat to bear the name.