Florida – A burst of smoke and column of flame trailed a United Launch Alliance Atlas V rocket Sunday afternoon as it powered a cargo-laden Orbital ATK Cygnus spacecraft onto an orbital path to rendezvous with the International Space Station in three days.

The mission will deliver experiments, equipment and supplies to the orbiting laboratory and its six-person crew of astronauts and cosmonauts. The enhanced Cygnus is carrying more than 7,000 pounds of materials that will directly support dozens of research investigations taking place in the unique environment of the station along with equipment for spacewalks and air tanks for the station’s atmosphere.

This is the first flight in a series that will include a crew change in addition to a Russian Progress cargo craft leaving and another one coming to the station.

“This is the beginning of an extremely busy time on station,” said Kirk Shireman, NASA’s program manager of the International Space Station. “We are looking forward to getting more science facilities and numerous research investigations. There are 324 investigations during this increment pair. It’s important to have a regular cadence of resupply flights, and we are looking forward to regular resupply to use the station as intended.”

It took only moments for the 191-foot-tall booster to lift the spacecraft off the launch pad at Space Launch Complex 41 at Cape Canaveral Air Force Station in Florida adjacent to NASA’s Kennedy Space Center to begin a steady, accelerating ascent into space. Launching at its first opportunity on Sunday, December 6th, at 4:44:56pm EST, the Atlas V pushed its payload through the low, thick air over Florida and the Atlantic Ocean before the 106-foot-long first stage spent its propellants and fell away allowing the Centaur upper stage to finish the flight into orbit. 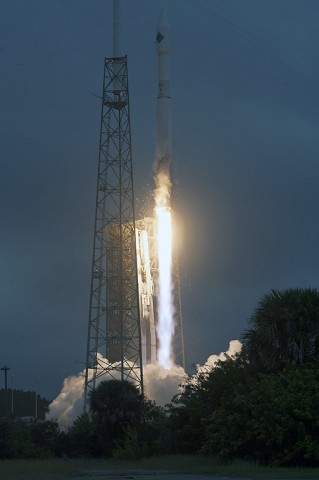 The launch marked the first time the workhorse Atlas V launch vehicle was used to send a spacecraft to the International Space Station. In the near future, Boeing and United Launch Alliance plan to use the Atlas V to launch astronauts to the station in the CST-100 Starliner for NASA’s Commercial Crew Program. SpaceX also is preparing its own launcher/spacecraft combination – Falcon 9 and Crew Dragon – to carry astronauts to the station in the near future.

“The Orbital ATK and United Launch Alliance teams quickly learned more during this launch campaign about tailoring the Atlas booster flight path so that our team and NASA can capitalize on the increased capacity of the enhanced Cygnus and the lifting power of the Atlas V to deliver large quantities of vital goods to the space station.  The crew members need these critical supplies from Earth to do their important work, and we intend to do everything possible to enable their mission to continue,” said Frank Culbertson, president of Orbital ATK’s Space Systems Group and a former astronaut.

The enhanced Cygnus, a larger version than the three flown previously, separated from the upper stage about 21 minutes after launch and later unfurled its circular solar arrays, another improvement of the enhanced version of the cargo-only spacecraft. Cygnus will fly autonomously under the close watch of Orbital ATK and NASA ground controllers until it nears the space station early Sunday morning.

NASA astronaut Kjell Lindgren, who has been living on the station since May, will operate the station’s robotic arm to grab the Cygnus and connect it to the station’s Earth-facing port on the Unity node where astronauts later will unpack it. Much of the scientific cargo will be used in research by the station astronauts.

With the new supplies aboard the station, the crew will install the laboratory equipment including a new life science facility that will allow studies on cell cultures, bacteria and other microorganisms. The astronauts also will conduct experiments to survey the behavior of gases and liquids and clarify the properties of molten steel in weightlessness. The station’s current crew, known as Expeditions 45 and 46, is to conduct more than 250 science and research efforts during its mission.

Cargo carried to space on this mission includes payloads that were lost on two previous failed cargo missions. HoloLens devices built by Microsoft are packed inside the Cygnus for use by astronauts as part of NASA’s Sidekick project.

Several teams of students ranging from elementary school age to university level also have a particular interest in this launch because their CubeSats are tucked inside a NanoRacks carrier for deployment from the station. CubeSats are small, inexpensive spacecraft built in standardized 4.5-inch-cubed units.

Students typically use the sophisticated craft to gain hands-on experience in electronics and design. Private companies are exploring the opportunities of launching versatile but simple spacecraft that could be used in groups for everything from establishing rapid communication links to weather forecasting.

“We chose CubeSats because NASA does have a program for it, and we’re well located in Washington, D.C. with NASA and the museums,” said Eleanor McCormack, principal of St. Thomas More Cathedral School, which built the St. Thomas More Sat-1. “My suggestion is to take a passion and understand if it’s something you’d really build into a curriculum. You have to be willing to take risks, come up with a plan your community would support, and pull together. Look at how to harness excitement and reach out to all the students within the curriculum.”

NASA enabled the deployment of three small research satellites, or CubeSats, selected through the CubeSat Launch Initiative as part of the ninth installment of the Educational Launch of Nanosatellite (ELaNa) missions managed by Kennedy Space Center Launch Services Program.

More than 400 students have been involved in the design, development and construction of the CubeSats that will be deployed from the International Space Station.

The CubeSats will be joined by other small satellites including SIMPL, a microsat by NovaWurks that carries its own propulsion system. The Nodes satellites, sponsored by NASA’s Space Technology Mission Directorate and developed by the Ames Research Center in Moffett Field, California, consist of two CubeSats weighing 4.5 pounds each and measuring 4 inches by 4 inches by 6.5 inches, and will test new network capabilities for operating swarms of spacecraft in the future.

The spacecraft will remain connected to the station through most of January as astronauts first unpack the new gear and then load some 3,000 pounds of used and unneeded equipment into the Cygnus along with trash. It will all burn up in Earth’s atmosphere after the Cygnus is released from the station.