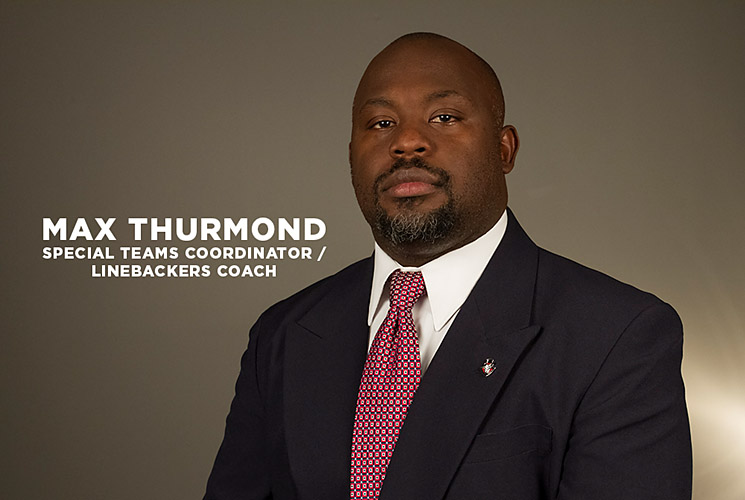 Late of West Alabama, Thurmond spent the past two seasons in a similar position for the Tigers. 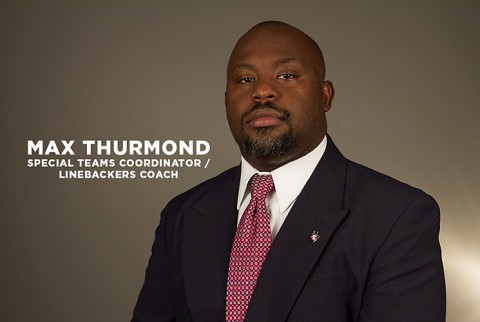 Prior to his time with the Tigers, Thurmond coached for 11 seasons at Jacksonville State (2001-12), beginning as a student assistant and spent much of his tenure working with the outside linebackers, cornerbacks and punt return team before ending his JSU career as wide receivers coach and special teams coordinator.

Thurmond’s tenure in Jacksonville saw the Gamecocks transition to the Ohio Valley Conference from the Southland Conference. Thurmond was a staffer for the 2003 and 2004 Gamecock squads that led the OVC in rushing defense, including the 2004 squad that was 10th in the nation, and led the league in turnover margin for three consecutive seasons.

Thurmond was on staff for three OVC Championships (2003-04, 2011) and playoff appearances in 2003-04 and 2010. With Thurmond as outside linebackers coach in 2009, the Gamecocks led the OVC scoring defense, total defense, pass defense and pass efficiency defense.

Between his time at Jacksonville State and his stint at West Alabama, Thurmond coached one season at Reinhardt (Georgia).

Thurmond graduated from Jacksonville State in 2001 with a degree in exercise science. During his playing career (1996-2000) with the Gamecocks, Thurmond recorded 63 total tackles as a cornerback.

Thurmond and his wife Gresha have two children, Maxwell Jr. and Asha.

Healy on Thurmond: “The special teams coordinator position is an enormous position for us because it’s a third of our scheme. I was looking for somebody who had a passion for special teams. When you get the chance to be around Max, you see his energy and enthusiasm. He’s got a great family and he brings all the things to the table I was looking for in that position. Whenever I called people about guys to hire, everyone I talked to who I trusted in this profession said Max is the best they’d been around.”

What They’re Saying about Max Thurmond

“Max is one of the truly special people I have ever known. He can discipline kids and bring people in the community into your program just because of his life and his family and their involvement in the community. He was a tremendous asset for us.” – Jack Crowe, former Jacksonville State head coach

“Max was an asset to our program over the last two years. He will do an outstanding job in his new position and we wish him the best.” – Brett Gilliland, Head Coach, West Alabama