The Wlodyka brothers were born and raised in the heart of Los Angeles, CA.

The youngest of the brothers, Derek, has a street performer background and has been actively wowing audiences since the age of 11, while Waldemar has a classically trained background.

Bryn and Drü moved to Los Angeles in the summer of 2012, from Ohio and Florida respectively, meeting through serendipitous circumstances that included chow mein and the Star of David. If that kind of eclectic cultural mix intrigues your mind, then the rock stylings of Hotstop will definitely jump start your soul.

The quartet recently relocated to their ‘new’ hometown of Nashville. Making the decision to do so was certainly influenced by the music they were writing. Songs “Superficial” and “Hipster Chick” indicate why the band recently left the jaded environment for their new creative hotspot.

“Those songs do touch on why we left,” Marshall reveals. “Los Angeles is just full of hipsters and that’s one of the reasons we moved out. We’re not into that too cool, not enthusiastic kind of scene. Go to a show in Los Angeles and people are just there standing still. People are desperate to be famous in LA. We would like to do well but we’re about earning it with our music. Nashville suits our band.”

Wicked Good Sandwiches hosts live music shows every Friday and Saturday. They are located at 605 Cumberland Drive in Clarksville Tennessee. 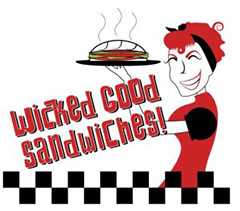 Now located on 605 Cumberland Drive, Wicked Good has expanded and now has a full stage and sound system, a mini arcade and the same great sandwiches that started it all back in 2012.