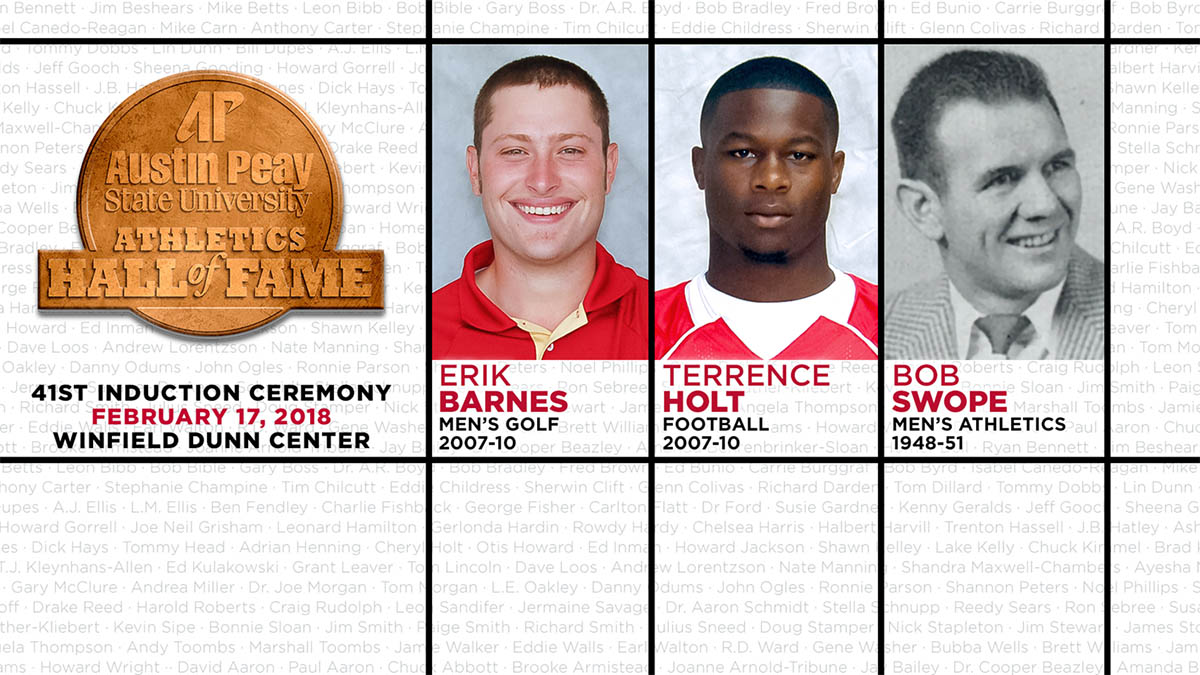 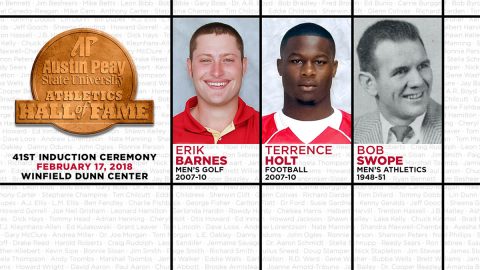 Holt, a Nashville native, was a threat to score every time he touched the ball during his Austin Peay career, and he often did—he scored 29 touchdowns during his APSU career (23 rushing, four kick return, two punt return) but was at his most dynamic in the return game.

The Nashville native still holds NCAA FCS records in single-season (52) and career (191) kickoff returns, as well as kickoff return yardage (4,683)—the latter mark a record across all divisions by more than 1,000 yards.

Barnes, a Marion, Indiana native, was a three-time All-OVC performer during a memorable Austin Peay career. He still holds Austin Peay’s 36- (132) and 54-hole (199) records, both set at the 2008 F&M Bank APSU Intercollegiate, and won an OVC title with the Govs in 2009, when he also was named OVC Player of the Year—the sixth Gov in program history to earn that distinction. He picked up three individual medalist honors during his career, including two as a junior—the F&M Bank APSU Intercollegiate and the UK Bluegrass Invitational.

Now the fifth inductee via the Honors category, Nashville-native Swope starred in four sports—basketball, football, baseball and golf—during his years in Clarksville. He won the VSAC golf championship as an individual in 1950 with a 228 (81-70-77), helping the Govs take the team title, and was a two-time all-tournament performer on the hardwood during the Governors VSAC days as well, finishing third on the team in scoring during the 1949-50 season. He also started at halfback on the football team, leading the Govs with three rushing touchdowns in 1950.

Barnes, Holt and Swope will become the 119th, 120th and 121st members of the APSU Athletics Hall of Fame during the annual Hall of Fame induction breakfast, 9:00am, February 17th, 2018 in the Dunn Center front lobby. They will be introduced during halftime of that night’s men’s basketball contest against Jacksonville State.

For more information about the Hall of Fame breakfast and reservations, call Tara Pfeifler, 931.221.6119 or email