Amato’s 4.15m (13-7.25) mark not only won the pole vault handily, it bested Molly Bartkiewicz’s eight-year old school record of 4.13m and moved the Delaware, Ohio into 15th placed in the NCAA as of mark’s entering the weekend.

“Can’t say enough about Savannah’s effort today,” said head coach Doug Molnar. “We knew this was coming based on how good she’s been performing in practice. She had a couple of really good looks at 4.23m as well, which would put her right in the mix for nationals.” 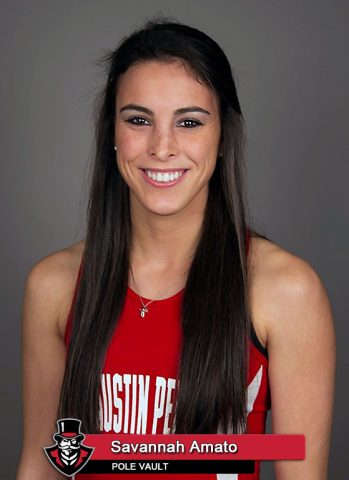 Freshman Lennex Walker continued a torrid start to her collegiate career with a third-place finish (8.87) in the 60m hurdles; she hit that same mark in the prelims, making her the top qualifier for the finals. Another short sprinter, sophomore Garielle Netter, narrowly missed qualifying for the 60m dash finals, finishing ninth with a 7.92 mark.

Austin Peay also had productive Saturday’s in longer track events as well. Sophomore Amelia Thiesing won the third heat of the 400m event, finishing sixth overall at 58.74, while freshman Allana Johnson‘s 1:00.77 made her the top finisher in Heat Five. In 3000m action, junior Emmaculate Kiplagat continued a season-long march up the OVC leaderboard, finishing eighth with a career-best 10:32.72 mark.

“Walker was a close third in the hurdles and Emma had a big personal-best,” Molnar said. “Our 60m group continues to grow and needs to be the backbone of our track crew. Overall, we improved but we need to make sure we continue to improve each time out.”

The Govs continue the indoor season with a long trip to Huntington, West Virginia for next week’s Thundering Herd Invitational, hosted by Marshall.